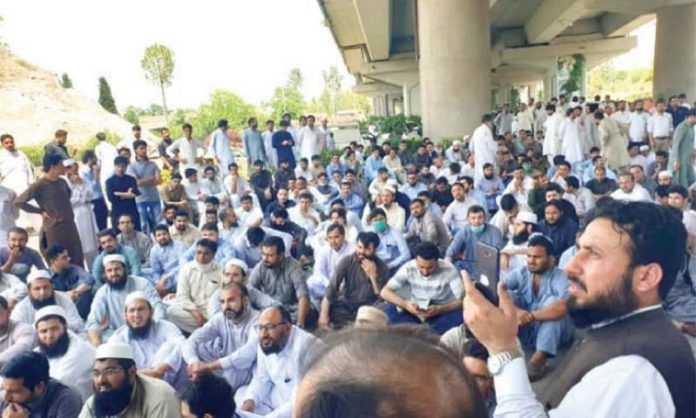 PESHAWAR: Despite the warning of strict action by the provincial government, Doctors in Khyber Pakhtunkhwa continue their strike for the third day to press the government for their demands. As a result, patients are suffering.

The Khyber Pakhtunkhwa doctor’s council has announced that their strike will continue and they will do duties only in emergency wards of the hospitals. Doctors said that all other services in hospitals, except emergency, will be closed.

The protesting doctors have demanded the government remove the provincial health minister Hisham Inamullah Khan and register a case against Nowsherawan Burki for violence against the senior doctor in Khyber Teaching hospital. They are also alleged that the board of governors is involved in corruption and sought immediate action against it.

Due to the doctors’ boycott, a kidney patient, who was shifted from Charsadda, has succumbed to his illness allegedly due to unavailability of proper treatment at the hospital.

Warning the doctors of strict action, the Khyber Pakhtunkhwa Minister for Information Minister Shaukat Yousafzai has said that patients are suffering due to the strike. He made it clear to the doctors that no one can stop the PTI government from reforming the health sector of the province.

Yousafzai added that the provincial government is ready to set with the doctors and listen to their issues. However, he said, all those doctors who have been transferred to serve in the far-flung area of the province must accept the transfer order. He added that doctors are getting hefty salaries and incentives and in return, they have to serve the public.

Prime Minister Imran Khan in a video message has also made it clear that the PTI government will not compromise on its health reforms agenda. He has said that the public has voted the PTI to reforms the decades-old system.

The issue first started, when the head of Board of governors, Dr Nowsherawan Burki was welcomed with rotten eggs in Khyber Teaching Hospital. Reportedly, Minister Health KP with guards rushed to the hospital and roughed the egg throwing doctor. The doctor has registered the case against the Minister while the government files case against the doctor for throwing eggs on Burki.