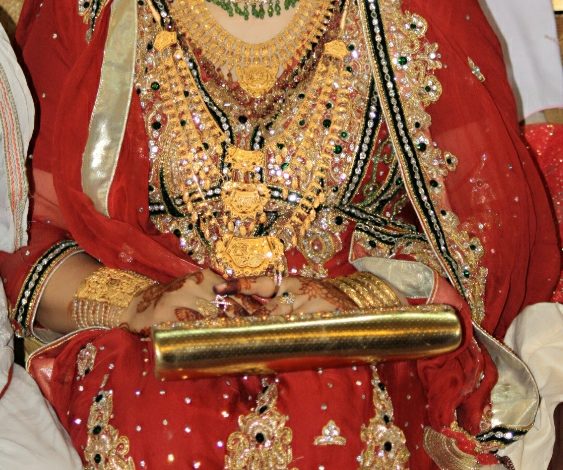 PESHAWAR: Razia was wearing a white dress for Nikah ceremony which was fixed two days ahead of Barat and preparing for the ceremony when someone whispered in her ear that this marriage won’t happen. The marriage was called off over her family’s demand from the groom’s family to give in writing that they would give 20 tolas gold jewellery to the bride in Nikah.

A single tola of gold nowadays costs over one lakh rupees and girls’ families demand ranges from five to 20 tolas in Haq Mahr which has resulted into cancellation of several marriages, like that of Razia.

The tradition of wearing golden jewellery is still widespread in rural Khyber Pakhtunkhwa, while girls of urban areas have started wearing matching artificial jewellery keeping in view the crazy prices of gold. This trend is slowly adopted by rural girls as well. However, during marriage, there is no compromise on gold jewellery from the girl’s side no matter if it is in less quantity, i.e. two or three tolas.

The sky-rocketing price of gold has made purchase of this commodity almost impossible for middle class people.

The extremely high price of gold has turned the commodity into a status symbol and those wearing it are considered rich and having special status. Still those, who can afford, give high quantity of gold jewellery to their brides which may range from 20 to 50 tolas. This is off course, not a healthy practice, because it depicts the class system and brings inferiority complex for those who can’t afford it. A boy’s family has no option but to reject the marriage with girl whose family demands an amount of gold which is beyond their affordability. For some, gold seems to be more important than the sacred bond of marriage.