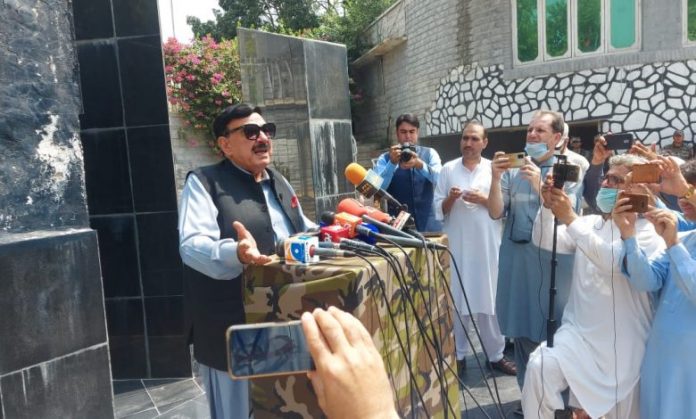 TORKHAM: Minister for Interior Sheikh Rashid Ahmed on Sunday said the situation at the Pak-Afghan border in Torkham is quite normal and there is nothing to worry about.

The minister said about 4,000 people have arrived from Afghanistan, but much more than that have gone to Afghanistan from Pakistan, so there is no refugee issue at present.

Sheikh Rashid expressed these views after paying a visit to the Pak-Afghan Torkham border point to review the security there. He expressed satisfaction over the security arrangements, and said that the trade and other activities are continuing smoothly from both the sides of the border. He said the Pak-Afghan bilateral trade will further enhance after the establishment of a new government in Afghanistan.

The minister said security has improved after implementation of comprehensive policy of border fencing with Afghanistan. About the evolving situation in Afghanistan, Sheikh Rashid said the message of Prime Minister Imran Khan is loud and clear that Pakistan will not allow any country to use its soil against another state. He said Pakistan has talked with the Afghan Taliban about the TTP issue, and hoped that the Afghan soil will not be used against Pakistan. He said 92 percent of the Pak-Afghan border has been fenced while 48 percent of the Pakistan-Iran border has also been fenced.

Urging the world to remain engaged with Afghanistan, Sheikh Rashid said the international community should understand the problems of the war-torn country. The minister said India had faced humiliation all over the world after the Taliban took control of Afghanistan. He said India had established 60 training camps in Afghanistan to carry out its subversive activities against Pakistan.