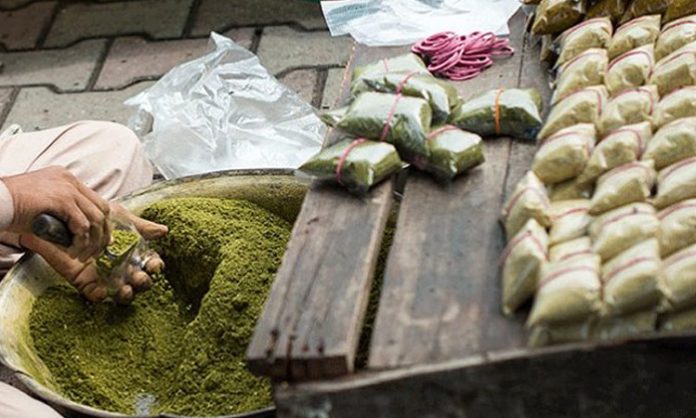 PESHAWAR: Naswar is a moist, powdered tobacco snuff consumed mostly in Pakistan, Afghanistan, Iran, Kazakhstan, Kyrgyzstan, Russia, Tajikistan, Turkmenistan, and Uzbekistan. Naswar is stuffed in the floor of the mouth under the lower lip, or inside the cheek, for extended periods of time, usually for 15 to 30 minutes. It is similar to dipping tobacco and snus.

Naswar in Pakistan is associated with Pakhtuns and many people think Pakhtuns introduced naswar but it was introduced into Western Europe by a Spanish monk named Ramon Pane after Columbus’ second voyage to the Americas during 1493-1496. In 1561, Jean Nicot, the French ambassador in Lisbon, Portugal, sent naswar to Catherine de’ Medici to treat her son’s persistent migraine.

If naswar it is chewed, it produces a bad taste in the mouth. Usually, the consumption varies but mostly people take it on an hourly basis as it is highly addictive. Nowadays, most of the people are against the use of this product because of its detrimental effects on health.

Naswar is known as the drug of the poor. It is less expensive than other drugs like cigarettes, paan etc. According to the Pakistan Tobacco Board (PTB), there is a huge market for naswar in the province estimated at around Rs6 billion annually. Famous for quality naswar, Dera Ismail Khan and Bannu, also export the product to Punjab and Sindh.

Naswar is popular among all age groups from 12 years olds to septuagenarians. Women are also among naswar addicts, but it is more popular among the younger lot who emulate their elders.

Medical experts are of the view that the diseases caused by naswar are more fatal than those caused by smoking. The health department has been engaged in a campaign against smoking through the print and electronic media, but has failed to run a similar campaign against the use of naswar.

The major side effect of using naswar is addiction, and it becomes difficult to get rid of it. It is also increasingly known that naswar often causes oral and throat cancer.