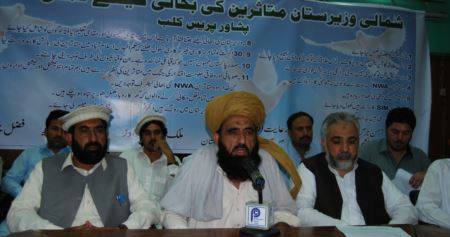 PESHAWAR, August 21: The Peace Jirga of North Waziristan has asked the government to fulfill the pledges made with affectees of military operation.

Members of the Peace Jirga told a press conference at the Peshawar Press Club that among 1.2 million IDPs, only 0.2 million people received assistance and relief package of the government.

They said a large number of people were facing problems of registration because thousands of IDPs were yet to be registered.

They demanded the government look into their decision about expelling IDPs from schools, otherwise they would stage protests.

They said the political leaders should stop mudslinging campaigns against one another and think of solving the problems of IDPs of North Waziristan.

“We have been issued notification to vacate the schools; where will we go? We want the government to send us back to our areas, otherwise the government must accommodate us in Islamabad,” stated on of the elders.