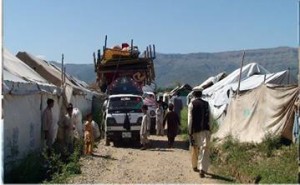 BANNU, June 19: The displaced people of North Waziristan have asked the government to increase the time duration given to them to migrate to some safer areas amid the ongoing military operation.

The displaced families, who came from Mirali to Bannu, said they had spent 18 hours on the distance which they usually cover in one hour.

They asked the government to facilitate them while travelling to secure areas.

An internally displaced person, Mr Saddam, told TNN, “We started our journey at 9am yesterday but there is no transport for the IDPs. Moreover, the time given to us to vacate the area is very short as 600,000 to 800,000 people cannot migrate in one day. We should be given 15 days for migration.”

He added that only 10% people were travelling in vehicles while most of them have no vehicles or transport and that they were covering the distance up to Bannu on foot.