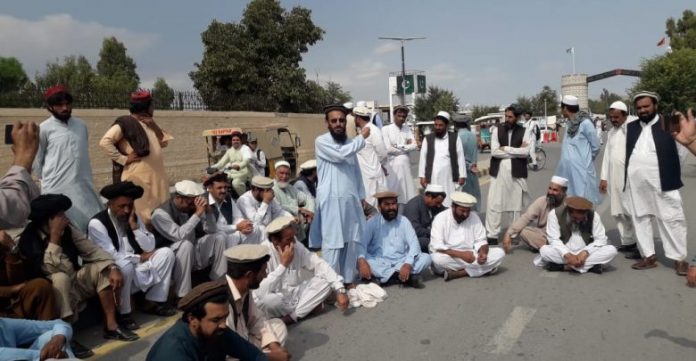 MIRANSHAH: The people of North Waziristan tribal district have once again initiated protests in favour of demands after relaxation of lockdown by the government.

The Market Owners Association staged protest in Mir Ali Bazaar over non-payment of compensation and announced a decisive sit-in for acceptance of their demands on June 08, while All Bargains Association has postponed its sit in over assurance by the government to accept their demands.

The Market Owners Association arranged a protest on Thursday during which the road was blocked and participants chanted slogans in favour of their demands. The Association president for Mir Ali Haji Bostan, general secretary Muhammad Shafiq, information secretary Malik Sher Ali and other leaders said while talking to journalists that several Jirgas and meetings were arranged for compensation for damages during operation Zarb-e-Azb, but their demands remained unfulfilled. They said a protest on the issue was also held two days ago and another protest was being held Thursday, but it was unfortunate that the government was not paying heed to their genuine demands.

The protesters said the market owners of Miranshah have been given compensation, but the owners of Mir Ali have been deprived for unknown reasons. They said the market owners have suffered massive losses and now they need compensation to resurrect their businesses and properties. They said they will stage a decisive sit-in from June 08 for acceptance of their demands.

The owners of damaged properties in North Waziristan had also held a one-month long sit-in outside the KP Assembly before the outbreak of coronavirus.

Meanwhile, All Bargains Association has postponed its sit-in over assurance by the government to accept their genuine demands.

However, the Association leaders warned that they will hold a massive sit-in if the government did not fulfil its pledges. The decision of postponing the sit-in was taken at a meeting of Bargains Association representatives in Mir Ali.

The Bargains Association had earlier threatened to boycott polio vaccination, block main highways in Ghulam Khan and stage sit-ins in Banigala and outside KP Assembly if they were not paid compensation for their damages during militancy and military operations.