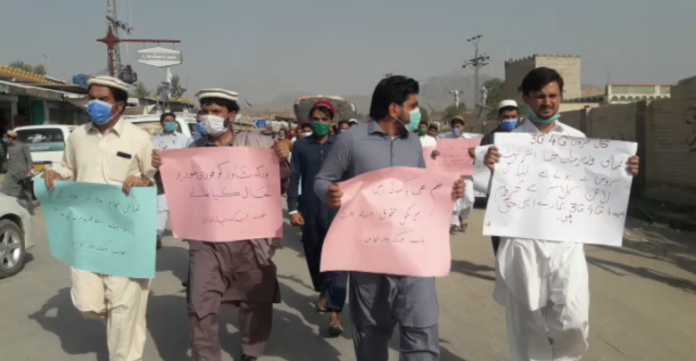 MIRANSHAH: The students of merged tribal districts are continuing protests against lack of internet facility in their areas as on Sunday the youth of Eidak area of North Waziristan staged protest for this purpose.

Dozens of youth participated in the protest and they also danced on drumbeats as a unique protest according to tribal tradition. The protesters also blocked Bannu-Miranshah road for all kinds of traffic.

The protesters said there is no facility of 3G or 4G internet in the area and the speed of PTCL internet has also reduced significantly due to which the youth, particularly those students taking online classes, are facing difficulties. They demanded the government to restore the mobile tower in Norak and also give connection to towers in Zerki and and Tarkai. They said every tower must be given coverage area range of at least 35 kilometres so that people could benefit from internet service.

The protesters said they must also be given internet facility like other Pakistanis. They said they would be compelled to stage a sit-in in Islamabad if their demand was not fulfilled.

The protest in Miranshah came two days after the student of Khyber tribal district staged protest in Bara against lack of internet service in the area.

The protest was arranged by Khyber Students Union outside Bara Press Club. The protesters carrying banners and placards demanded that online classes must be suspended till provision of internet facility in merged tribal districts.

On June 12, the student unions of tribal districts demanded immediate restoration of internet service in the area and asked the government to stop online classes if internet cannot be provided and the students must be promoted to next semesters and classes.

Addressing a joint press conference at Parachinar Press Club, Tribal Youth Movement leader Idrees Khan, Kurram Students Organisation president Saleem Khan, Fata Students Federation general secretary Zahid Shah and other student leaders and tribal elders said non-restoration of internet facility in merged tribal districts despite the court order is injustice with the students. They said all the educational institutions are closed throughout the country after which the government has initiated online classes, but the tribal students cannot benefit from it as they don’t have the internet facility.

The students of tribal districts are holding protests and press conferences recently for resumption of internet facility, but their demand is yet to be fulfilled. The tribal students say they cannot compete with the students of settled areas due to lack of internet as the modern education system is incomplete without internet.