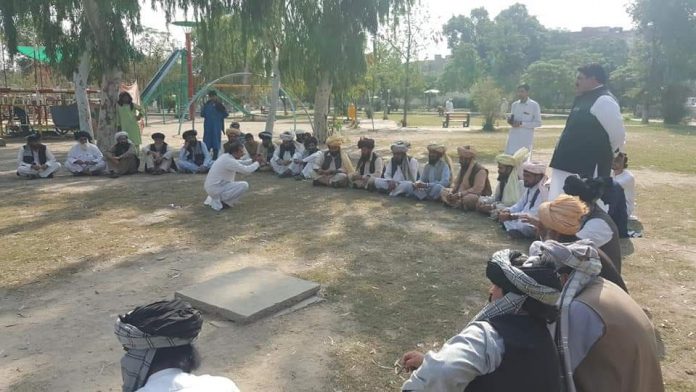 MIRANSHAH: The temporarily displaced persons (TDPs) of North Waziristan tribal district have announced to join the Azadi March of the Jamiat Ulema-e-Islam-Fazl (JUI-F) against the government.

Speaking on the occasion, the tribal elders and representatives said the TDPs said they have no other option but to lodge protest over their unresolved long standing issues. They said the TDPs approached every forum for resolution of their issues, but nothing happened and now it seems that these problems will be solved on roads. They said several Jirgas and meetings were held to convey the government about the unresolved issues of TDPs, but most of the problems still remain unresolved.

The tribal elders said peace has returned to North Waziristan, but the TDPs of North Waziristan are still stranded in Afghanistan and their repatriation has not been completed. They said the TDPs in Afghanistan are living under very difficult circumstances and they are even more disturbed over the apathy of the government. He said the displaced persons are tired of listening to the empty promises of the government. He said the pledges of the Provincial Disaster Management Authority (PDMA) are also not fulfilled so far.

The tribesmen at the Jirga said they offered countless sacrifices for peace in the country and in return they are getting nothing. They no mega development schemes have been launched by the government in North Waziristan despite the fact that this area suffered the most during militancy. They said it is the government’s responsibility to ensure peaceful environment and bring development in tribal districts. They said the government asks the citizens to play their role, while it is not playing its own role in improving the situation.

They said people of tribal districts are known for their patriotism and therefore they deserve better treatment. They said they want nothing but graceful return to their homes and resumption of their normal life and businesses. They said all the affected people must be compensated for their damages without any discrimination.