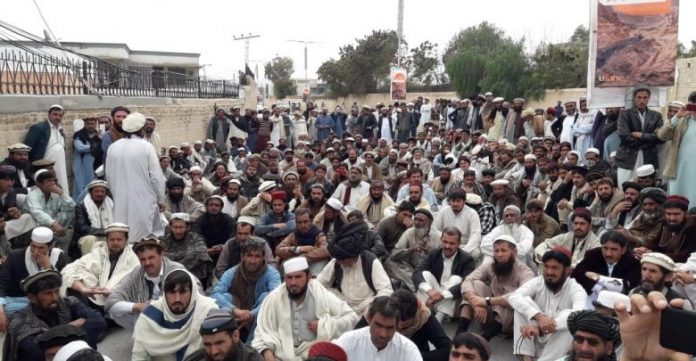 MIRANSHAH: The traders of North Waziristan tribal district on Monday staged a protest demonstration in favour of their demands.

A large number of local traders participated in the protest outside Miranshah Press Club building. The traders demanded the government to pay them compensation for the damaged shops in Miranshah Bazaar during the military operation.

The traders also blocked Bannu-Miranshah Road for some time to record their protest. The vehicles on the road were stranded due to protest of traders due to which commuters and transporters faced difficulties. However, they opened the road after some time.

The protesting traders also danced on drumbeats and performed tradition atten dance to record their agitation in a unique fashion. They also chanted slogans against the administration for not resolving their problems.

Nura Gul, a local trader, said while addressing the rally that the traders offered countless sacrifices for the countries and lived in displacement due to law and order issues due to which they suffered losses of billions of rupees.

Muhammad Rehman, another trader, said the civil and military officials had assured to redress grievances of local traders eight months ago, but now the civil administration is putting impediments.

Imshadullah said most of the people in North Waziristan are poor and cannot resurrect their businesses on their own. He said the traders cannot wait more for the compensation.

There is also a dispute on the share in the reconstructed Miranshah Market which was destroyed during the military operation. The authorities have assured that the reservations of the traders and shopkeepers over the share in the market will be addressed, but the issue remains unresolved.

After return of the temporarily displaced persons (IDPs) to North Waziristan tribal district, life activities are resuming quickly, but the trade activities are yet to gain full momentum due to problems faced by traders. They said they lost everything during the life of displacement and after return to their native area, they need government support to resume their businesses.