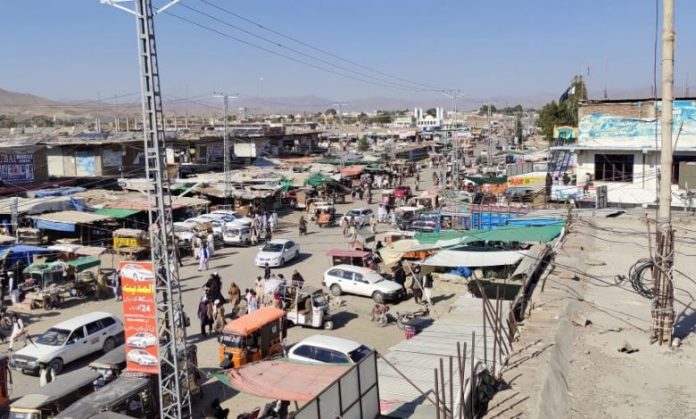 Before the Operation Zarb-e-Azb, North Waziristan was known as the mini-Dubai due to its huge trade. Before the operation, business was booming despite bomb blasts, targeted killings and kidnapping for ransom. Also businessmen from far off places like Mohmand, Bajaur, Peshawar, Mardan and other parts of country used to do their business activities in the district.

However, due to deteriorating security situation on June 16, 2014, government announced to launch the Operation Zarb-e-Azb in the North Waziristan. Most of the district’s markets were demolished during the operation while people left their homes for safer parts of the country.

The displaced persons returned to their homes, three years later. Before, the operation, there were thousands of shops in Mir Ali Bazaar. Today thousands of shops are operating the same bazaar and trade activities are booming. However, targeted killings and deteriorating situation are again causing worries to locals.

Lala Dawar, a trade in Mir Ali Bazaar said that there were about 4,000 shops in the bazaar, which were destroyed during the military operation.

“Not only locals but also traders from Bannu, Lakki Marwat and other parts of the country were connected with the trade in North Waziristan,” he said.

He said that Mir Ali Bazaar has been built anew and has more shops than the previous one. However, Lala said that both the traders as well locals were not happy with the unfolding uncertain situation.

He said that target killings were taking place in the town on a daily basis. “Recently unknown persons set several shops in Mir Ali Bazaar on fire and no culprit has been caught yet,” he said.

Lala said that several days ago, unidentified persons set fire to PTCL system in the same bazaar and deprived traders and residents of the surrounding villages of internet and communication system.

District administration needs to address the security concerns of the locals, he said.

North Waziristan was known as mini-Dubai

He said that goods from countries including Japan, Germany, Malaysia, China, Russia and other countries used to arrive in North Waziristan via Afghanistan at cheaper rates, he said.

Mr Dawar said that the same goods used to be transported to the rest of Fata and other parts of the country; however, the military operation destroyed this entire trade.

“Closure of Ghulam Khan crossing, collection of custom duties despite the crossing being a tax free zone, damages due to military operation, end of trade with the other parts of country and poor law and order situation has dealt a death blow to district’s trade,” Mr Dawar said.

Shafqat Dawar, another trader told TNN that there were before the operation there were about 15,000 shops in Mir Ali and other towns on its outskirts including Aidak and Harmuz Patsi Adda.

He said that following return of displaced, local traders started agitation for compensation after which government compensated 3706 traders. However, Mr Shafqat said that about 10000 traders were still awaiting payment of compensation.

He said that they were assured in the first phase affectees of Miranshah and Mir Ali bazaar, being major centers, would be compensated. Mr Shafqat regretted that the first phase was still not complete and thousands of traders were awaiting their payments.

“Bazaars like Mir Ali and Miran Shah fall in the first category while the Ghulam Khan fell in transit and bilateral trade,” DC Khan said.

He said that trade activities in Mir Ali, Miran Shah and Razmak bazaars were back at their previous levels. Regarding compensation, he said that Mir Ali Bazaar affectees have been compensated fully. About Miran Shah. he said that the was case pending due to litigation.

Regarding transit and bilateral trade, he said that it has more than doubled. “Now there are up to 550 trade vehicles cross the border as compared to three to four such vehicles before the operation,” he said.

He said that new uploading points have been setup at Miran Shah and Ghulam Khan zero points.

He said that they were focusing on bilateral trade to increase employment opportunities. The DC said that government has also approved an area development programme for the district to develop agriculture, livestock and other sectors.

“Work on beautification of bazaars is going on,” he said.

He said that work on North Waziristan industrial estate was in its final stage. The project, he said, was likely to create employment opportunities for about 14,000 people.

The DC said that most of the Mir Ali Bazaars have been paid compensation for their damaged goods while those remaining would also be paid soon.

Regarding losses of land and building he said that they have shared details of public demands with the Khyber Pakhtunkhwa’s chief minister.