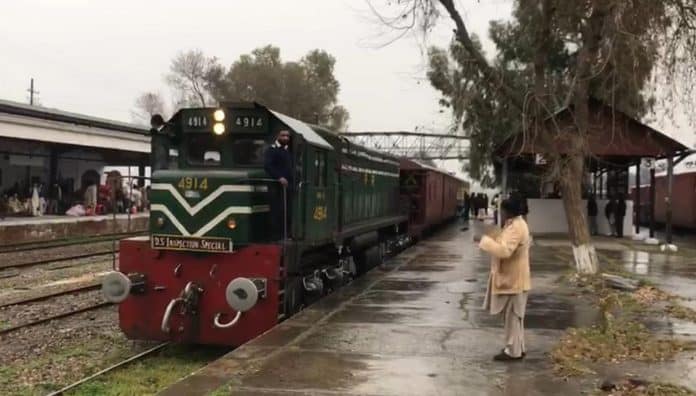 The track has not been in used for the last ten year, however, KP government, last month, decided to restart it for tourism purpose. In the first phase, it was decided, Safari train will be started to the world heritage site of Takht-e-Bhai and then onward to Dargai, Malakand.

Divisional superintendent, Pakistan Railway Peshawar Nasir Khan Khalily, who was present at Nowshera Junction during the inauguration of repair work, said that the railway minister has directed the officials to provide all possible assistant and support to the KP government in their efforts to revive the tourism industry in the province.  Khalily said that Railway has an important role in the revival of the tourism industry and to involve the people in healthy activities.

As a part of efforts to promote tourism, the provincial government has decided to start three safari trains, From Peshawar to Torkham, Peshawar to Attack Khurd and Peshawar to Takht-e-Bhai. The railway official said that the restart of the two can be started without much efforts, however, the restart of Khyber Safari train to Torkham will require some Rs 1.5 billion. However, Khalily said that they’ve completed the survey are will also start the repair work on the track soon.

Khalily while talking to TNN said that the ancient Buddhist heritage site at Takht-e-Bhai has been declared as the Unesco world heritage site in 1980. Hence, it can attract tourists from across the world, especially from Buddhist countries.  He maintained that if tourists are provided with quality facilities, not only tourists can be attracted from but it will also generate jobs opportunities for the local population. Khalily hoped that the repair work will be completed in March, after which it will be ready to start the Safari train till Takht-e-Bhai.

The Commercial Manager of Pakistan Railway Saba Jabeen told TNN that the revival of the track and its usage for Safari train will also help revive the culture of travelling in railway. She added the Malakand will once against the re-linked via train to other parts of the country. Talking about the encroachments along the railway track, she said that they are taking action against them, however, when people come to know that the train is being started again, they will clear the track.