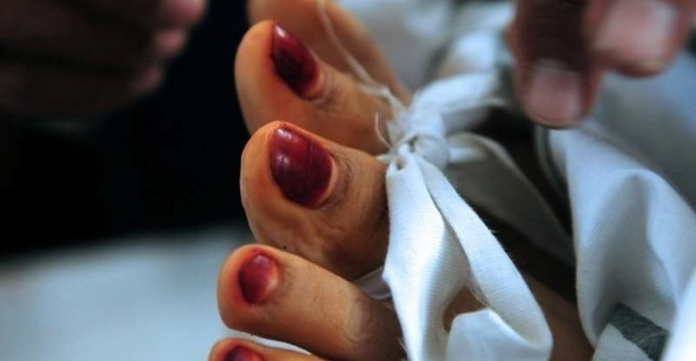 NOWSHERA: A 17-year-old woman and her husband were killed allegedly by her brothers for marrying without their consent in Nowshera’s Raisalpur area, police said.

The local people told the media that the two men, riding on a motorcycle, entered Tahir’s home, by force, and opened indiscriminate firing on Tahir and his 17-year-old wife. As a result, the duo died on the spot.

Raisalpur police said that the tragedy occurred in Gharib Abad area, where two accused identified as Asfandyar and Muhammad Yaar allegedly killed their sister and brother-in-law inside her home. Police added that after committing the gruesome crime, both the accused escaped from the crime scene.

The police furthered that initial investigation shows that the due have contracting marriage against the well of her family, last year, but girl’s family was not ready to accept despite a number of efforts to resolve the issue peacefully by the local elders.

Police added that the local elders have arranged several Jirgas, however, the girls’ brothers were not ready to accept the marriage against their sister against their well.

One the complaint of Zamir Khan, father of the deceased Tahir, Raisalpur police have registered First Information Report (FIR) against Asfandyar and Muhammad Yaar and started a further investigation into the case.

NOWSHERA: A Police constable has allegedly killed wife in name of ‘honour’ in Raisalpur area of district Nowshera. According to local people when the Police constable Zahir came back home from duty, he found his wife with a man inside his home.

He took the gun and first opened fire on his wife killing her on the spot and then went after the man, who tried to escape from the spot but he received bullets injuries and was shifted to Mardan Medical Complex.

On the complaint of the girl’s father, Raisalpur police have registered a case against Zahir and started further investigation.