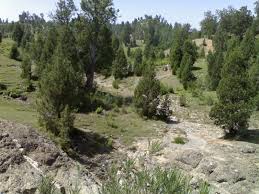 They asked the governor to take notice of an order through which they were being forced to take the commodity via South Waziristan Agency.

The elders of Kabulkhel, Bakakhel and Gurbuz tribe have written a letter to the security forces and political administration and requested them to grant them permission to transport the dry fruit directly to Bannu through Bannu via Dattakhel and Razmak which, they claimed, was the shortest route.

The elders said that they have been ferrying the commodity via Razmat and Dattakhel since long and wondered why the authority were forcing them to change the route.

They said that going through SWA would cost them extra money in terms of toll taxes and fuel that would lead to rise in price of the commodity.

The letter said that they would be left with no option but to increase price of the already expensive dry fruit due to extra transportation cost and toll taxes.

Dismissing the idea of opting for routes via South Waziristan, they said the farmers and traders would equally suffer if the decision was not withdrawn.

They agreed if the authorities didn’t pay heed to their request they would not to take the commodity to any other market instead of fruit mandi in Bannu no matter what.

After repatriation, the government allowed under an agreement the owners of pine nuts to use the shortest possible routes but later the political administration changed mind forcing them to use the route through SWA>