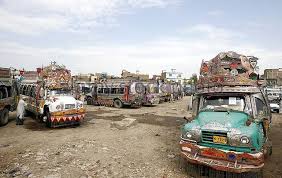 PESHAWAR: The drivers of the tribal districts face a lot of difficulties due to lack of any Regional Transport Authority (RTA) office in erstwhile Fata.

The tribal transporters and drivers said they had to go to divisional headquarters of RTA for making their driving licences where officials at different levels fleece them. They said it is very difficult for them to go to settled areas for obtaining driving licences. They alleged that the tribal drivers are often fleeced by the driving licence office staff, particularly in Kohat. They said a driver either had to pay bribe or have a strong reference for obtaining licence and those who don’t do so had to return empty handed.

The people visiting the RTA offices often complain that the staff give them a date for driving test and very few of them pass that test. Some officials (or front men) sitting outside the office ask every visitor that they can help them skip the test and demand money for that purpose. Those who pay the money get their licences through a short-cut process, while those who go through proper procedure keep waiting for months.

The tribal drivers also complained that the traffic police in settled districts impose heavy fines on them if they don’t possess driving licences.