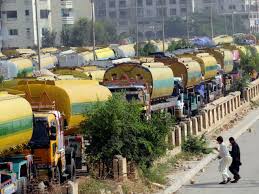 ISLAMABAD: All Pakistan Oil Tankers Association has announced to shut supply of oil to the whole country from Sunday (today) in protest against government decision to ban old model trucks.

He said that they put their demands before the government and informed it that banning old model oil trucks was nothing but injustice.

The government was told that it will render hundreds of the people jobless, but in spite of our warning, 600 trucks in Punjab, 300 in KP, 200 in Balochistan and 700 in Karachi have been banned, he added.

The association head said the government had assured them of reverting this ban within ten days, but the deadline was over and nothing has happened to resolve the issue.

We are left with no other option, but to call for a countrywide strike, he said, adding that petroleum products and jet fuel supply will also be kept closed.