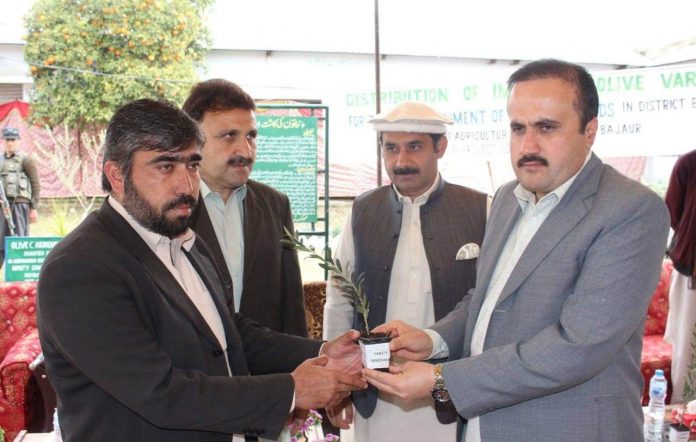 KHAR: The Agriculture Department of Bajaur tribal district has started distribution of free of cost olive saplings among local farmers as part of the spring plantation campaign.

A ceremony in this regard was organised in Civil Colony in Khar, the district headquarters. Deputy Commissioner Bajaur Usman Mehsud opened the campaign by distributing olive saplings among the farmers. On the occasion, he also planted an olive sapling at the Agriculture Department office.

In his address, the deputy commissioner said olive tree plantation will improve the economy of the area and it will also put positive impact on environment.

The people of Bajaur after coming to know about the benefit of olive tree plantation are now growing olive trees on their lands in increasing number.

Divisional Forest Officer Hayat Ali says plantation is underway in Bajaur under the prime minister’s ten billion trees scheme for the country. He says the Forest Department prefers to plant those trees that can bear the impact of climate change. He says 9,000 olive trees have been planted under the same initiative this year.

Agriculture experts say the olive tree did not require much water. The impact of climate change has severely affected the production of certain trees in Bajaur, but olive tree can grow in this environment. Olive tree only requires 5.5mm water in a year. The Agriculture Department is planting more olive trees in area which are facing water shortage. Five species of olive plants are being planted in Bajaur according to the recommendations of experts.