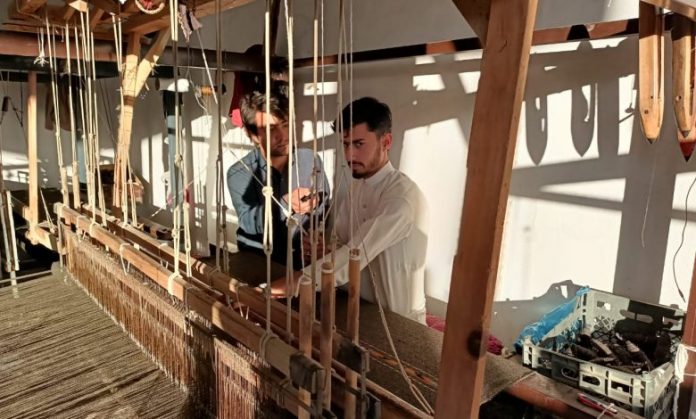 Abbas Khan’s family in Islampur area of Swat district is associated with the woolen shawls business for past many generations.

Khan said that the pandemic baldy hit their businesses. “Before Covid-19 business was very good,” he told TNN.

Islampur weavers export raw material for their products from China and Australia. During the pandemic, they faced a double whammy, wherein at one hand, their supplies come to grinding halt due to lockdowns.

On the other hand, restrictions also led to stopping the transportation of their finished products. The resultant situation caused heavy losses to the Islampur’s cottage industry.

Islampur a small town of 25,000 people and majority of them are associated with weaving. Most of the area’s males and females of the area work in the weaving units. It is even said that there is not one unemployed person in the entire Islampur.

They said that Islampur weavers produce 18,000 shawls a day and it generates Rs 3 billion a year. However, the pandemic hit nearly 80 per cent of the businesses, causing losses amounting to Rs 1.5 billion.

Looming threat of Omicron over Swat’s tourism and cottage industries

Islampur’s weavers said that government’s failed to do anything for their industry in the previous four surges of the pandemic. At the same time they also fear looming threat of renewed lockdowns due to rapid spread of new variant.

“A lockdown will be very damaging for us,” they said.

Over the past few years, Swat has emerged as tourism’s hotspot in the country. Due to area’s scenic beauty and cool climes, a large number of tourists visit the area every year; therefore, majority of area’s population is dependent on it for their livelihood.

Mr Khan said that the lockdowns prevented the tourists from visiting the district, which in turned diminished their sales. “Majority of the tourists used to purchase Islampur shawls during their stay in the valley,” he said.

Confectioners of Dera Ismail Khan district in the southern Khyber Pakhtunkhwa also faced the similar situation during the pandemic. These confectioners are known for making the district’s famed Sohan Halwa.

Sufi Munir, a trader who deals in Sohan halwa near Indus River said that his business was entirely dependent on tourists.

He feared that they would not be able to pay even their rents if another lockdown was imposed.

Arbaz, who runs a hotel on the banks of the Indus River said that the pandemic not only brought his income to zero but also rendered several of his workers jobless. He said while he was paying rent for the most part of 2020 for the hotel; however, there were no tourists due to travel restrictions.

Professor Ahmed said that the lockdowns washed away nearly 30 per cent of the district economy.

On the other hand, reports about cases of Omicron variant is fuelling unease among the business community of the province. However, health experts are advising masses to get themselves vaccinate and follow SOPs to avoid the virus.