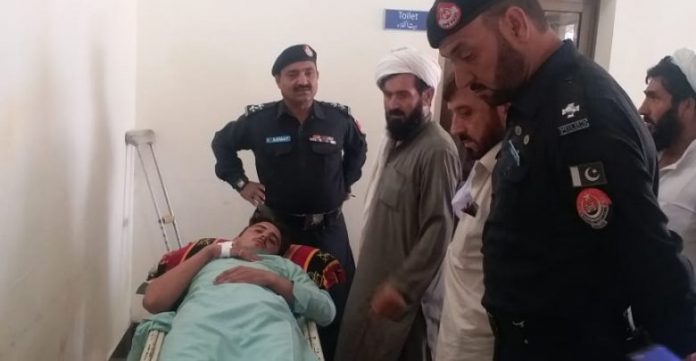 MIRANSHAH: One person lost his life and four others sustained injuries in a firing incident at a music function in North Waziristan tribal district on Wednesday night.

Local sources said the incident happened in Shaga area of Dattakhel tehsil late on Wednesday night where the local youth had arranged a music function to celebrate Eid. Unknown armed men opened fire on participants of the music function due which one person was killed and four others were injured.

Police said the deceased was identified as Alamzeb. The four injured persons were shifted to nearby hospital for treatment.

The armed men escaped from the scene after the incident. Police has initiated investigation into the incident.

The area people have expressed grave concern over the incident and demanded the security agencies to arrest the culprits. The law and order situation in North Waziristan tribal district has improved considerably after the conclusion of military operation against militants and returned of temporarily displaced persons. However, some incidents of sabotage still happen from time to time due to which people raise concerns over the security situation. The security forces also conduct intelligence-based operations in the tribal district from time to time to target militants.

On August 09, two security personnel were injured in a firing incident in North Waziristan.

Local sources said the incident happened in Bahramand area of Dattakhel tehsil where unknown miscreants opened fire on security personnel on duty at a roadside picket.

A day earlier, a 14-year-old boy was critically injured in a landmine blast in Dattakhel tehsil of North Waziristan.

On August 03, three soldiers were martyred and another was injured in two separate incidents of firing in North Waziristan.

Sources said the first incident of firing happened in Razmak tehsil, while the second incident happened in Dattakhel tehsil. A large number of security forces personnel reached the site of the firing and cordoned off the area.