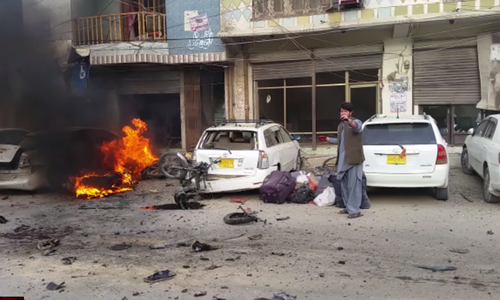 CHAMAN: At least one person was killed while nine others were injured in an improvised explosive device blast in Balochistan’s Chaman city on Sunday. The injured are including three Frontier Corps (FC) personnel.

Police said miscreants allegedly targeted a vehicle carrying FC personnel on Mall Road where they fitted IED to a motorcycle parked on the roadside.

The injured were rushed to Civil Hospital Chaman for medical treatment where a state of emergency was imposed to treat the injured. The impact of the blast broke the windows of nearby shops and vehicles.

Police, Levies and Frontier Corps officials have cordoned off the site of the blast.  Chaman Station House Officer Gul Muhammad said a vehicle belonging to a law enforcement agency (LEA) was the target of the blast.

A similar blast occurred in Chaman on July 20 this year leaving at least five people injured and nearby shops and cars damaged.