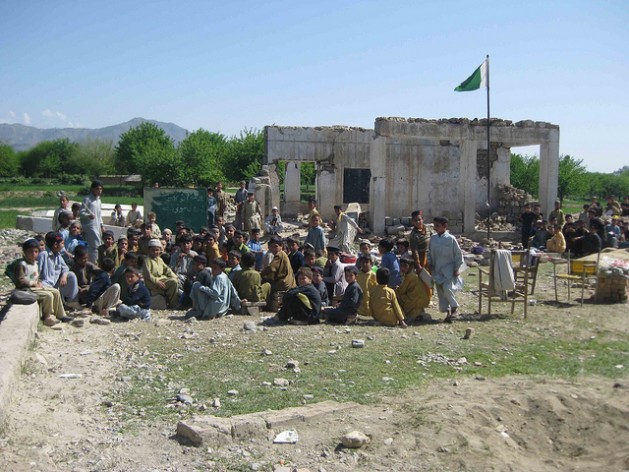 PESHAWAR: Director Education tribal districts Hashim khan Afridi has revealed  that over a million children are out of schools in tribal belt during an interview with TNN on World literacy day in Jamrud on Saturday.

Leading a an awareness walk from the education office to Bab-e-Khyber in Jamrud Khyber Agency, Hashim Khan said that around 0.45 million children were out of primary schools across the tribal districts and to address this issue, the parents should come forward and enroll their kids in various schools. He said that government was running 175 alternative learning schools to educate overage children who left education due to militancy and military operations in tribal region.

Talking to TNN Senior Tribal Journalist Ibrahim Shinwari said thousands of students were forced to leave their education half way after their families were displaced from various tribal districts due to chaos over the last ten years.

“Lack of facilities such as drinking water, toilets and staff in the tented schools are some of the reasons responsible for keeping these children out of schools. During life of displacement, a large number of children missed few years of education and now it’s impossible for them to catch up with their peers and regular students”, Ibrahim elaborated.

He appreciated the establishment of Alternative Learning schools but questioned the quality of education being imparted in these centers. He said that these schools were not up to the mark to fill up the education gap of years among different age group of children in a single year. “It is a very serious issue to have one million children out of schools and government has completely failed to fulfil its responsibility of educating this generation. However, I hope with the integration of FATA into KP, education will be improved in tribal areas”, he remarked.

According to FATA secretariat, over 1300 government schools were either damaged or destroyed by militants from 2004 till 2016 in the entire tribal regions. Around 500 schools were rebuilt by the government while the rest of them are yet to be reconstructed.

The slow reconstruction and rehabilitation process has also discouraged parents to send their kids to tented and damaged schools, said Ibrahim Shinwari.

Giving the example of Upper Orkazai Agency where 98 percent building were damaged in militancy and military operations, Shinwari said that 25000 families have returned to the area on paper but in reality majority of these families still live in Hangu and Kohat districts due to damaged properties back in their hometowns.

Educationist and principal of Afridi Model School and College Jamil Afridi said since the people of tribal areas have lost everything including their children’s education, therefore, it was the responsibility of the government to provide free education to all children till grade 12.

There are still areas inside FATA where no private and government school exists and as a result, children of the respective areas grow uneducated” he said. Jamil criticized FATA secretariat for discouraging public private partnership to promote education in the region. The government should take prompt action to enroll street and overage children in schools across the FATA.

“These seriously debilitating shortcomings lead to a de facto exclusion from society and perpetuate a spiral of social inequalities and gender inequalities. On this International Day, I call on all stakeholders in the world of education, and beyond, because it is a cause that concerns us all, to mobilize so that the ideal of a fully literate global society becomes more of a reality”  said Audrey Azoulay, Director General,UNESCO.