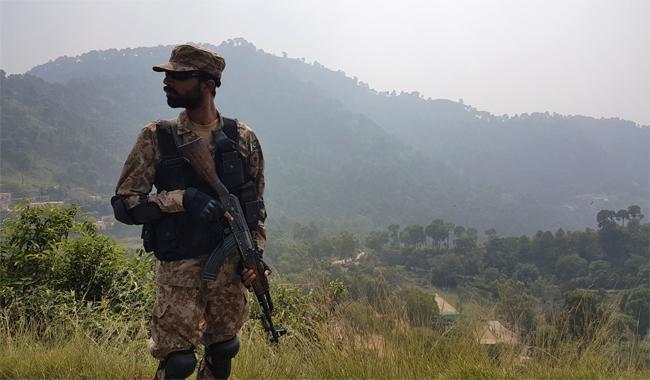 MIRANSHAH: A security personnel was martyred and another was injured in a bomb attack on their vehicle by unknown miscreants in Mir Ali sub-division of North Waziristan tribal district on Tuesday.

Police and local sources said unknown miscreants attacked a vehicle of the security forces with a remote control bomb and also opened fire on it. One soldier was martyred in the attack, while another was injured.

The security forces clamped curfew in the area and encircled it and launched a search operation. However, there were no reports about any arrests during the operation.

The security forces often conduct intelligence-based operations after receiving credible information about presence of militants to ward off any threat of future attacks. Militants were driven out from the tribal districts in military operations, but still terrorists sometimes attack the security forces from their leftover hideouts.

On April 19, the security forces had conducted an operation n Speen Wam area of North Waziristan and killed five terrorists associated with the Tehreek-e-Taliban Gul Bahadur Group. The military said the operation was carried out over credible intelligence about presence of terrorists and their facilitators.

On April 14, a soldier of the Pakistan Army was martyred in firing by militants in North Waziristan.

According to the Inter-Services Public Relations (ISPR), two terrorists were also killed in the exchange of firing. The military media wing said the security forces conducted an intelligence-based operation in Dattakhel area on information about presence of terrorists.

The clash in Dattakhel happened three days after a clash in Zakirkhel area of North Waziristan in which two soldiers of the Pakistan Army were martyred, while seven terrorists were also killed.

According to the ISPR, the security forces after receiving credible intelligence about the presence of terrorists conducted an operation in Zakirkhel area. Seven terrorists were killed during the operation, while two soldiers also embraced martyrdom.