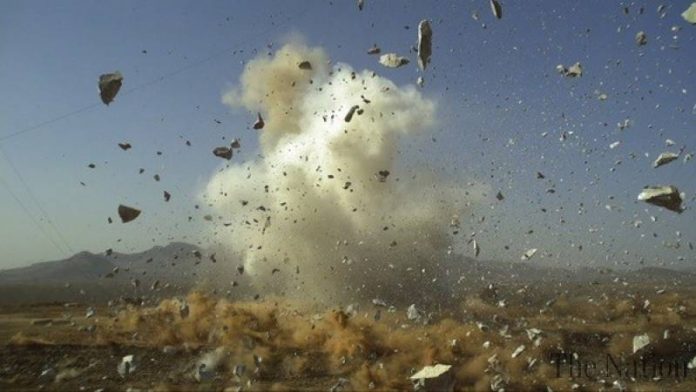 PESHAWAR: An Improvised Explosive Device (IED) hit a patrolling party of security forces, as a result, a soldier was martyred while three others sustained injuries, said security sources on Thursday.

The incident was reported from Gorryom area of Sub-division Razmak of North Waziristan tribal district on Thursday. The victim soldiers were identified as Sepoy Sajid Shah, who martyred in the blast while three others, Sepoy Naik Sajid, Naik Afzal and sepoy Waseem were injured.

It was informed that the blast occurred when the soldiers were conducting search operation when they were hit by a planted improvised explosive device when the patrolling party reached near the site.

After the incident, security forces cordoned off the area for search operation while injured were shifted to military hospitals.

Landmines and IEDs have become a serious threat to the lives of innocent tribesmen as well as the security forces. Dozens of tribal people and forces men have lost their lives or maimed by the IEDs and landmine in tribal districts. The people of tribal districts for long been demanding the government to clear the area from IEDs. Besides North Waziristan, such IEDs were also found from time to time in Kurram, Tirah valley of Khyber and border regions of both Mohmand and Kurram.

They have caused injuries, disabilities and even death to numerous people, including children and women. According to a Pakistan Red Crescent Society, more than 2,000 cases of landmine blasts were reported in tribal districts over the past few years.