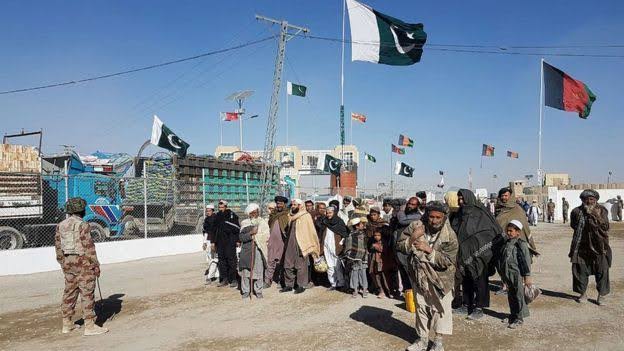 WANA: The Ahmedzai and Utmanzai Kabalkhel Wazir tribes of South Waziristan tribal district have called upon the government to open the Pak-Afghan border at Angoor Adda for travellers and traders.

Residents of the area said it is a good news that Torkham border will remain open round the clock for transit trade for five days a week and one day a week for those who want to cross the border on their foot. However, they said, it is unfortunate that no one is discussing the opening of Angoor Adda border in South Waziristan.

The Wazir tribesmen said they are also equal citizens of Pakistan and deserve facilities which are provided to people in other parts of the world. They said the border gates of Ghulam Khan and Angoor Adda must also be opened to facilitate the people on both sides of the border. They said the opening of these borders will pave way for return of the stranded Pakistani citizens in Afghanistan. They demanded the government to raise the issue with Afghan officials and make arrangements for opening of Angoor Adda border.

The local people said they are facing difficulties due to closure of Angoor Adda border and their businesses have suffered.

The demand for opening of Angoor Adda border has come two days after announcement by the federal government that Torkham and Chaman borders will now be open round the clock, six days per week.

The Ministry of Interior has issued a notification the Torkham and Chaman borders will remain open 24 hours for six days except from Saturday which will be reserved for pedestrian move only as per procedure already in practice. The standard operating procedures (SOPs) would be implemented for pedestrians as well.

During six days when the border will be open, unlimited number of trucks will be allowed to cross per day while ensuring proper SOPs and guidelines for both bilateral and transit trade with Afghanistan.

Traders have welcomed the decision terming it as a milestone in promoting trade between Pakistan and Afghanistan.

With the opening of Torkham and Chaman borders, now increasing demands are being made for opening of Ghulam Khan and Angoor Adda borders.