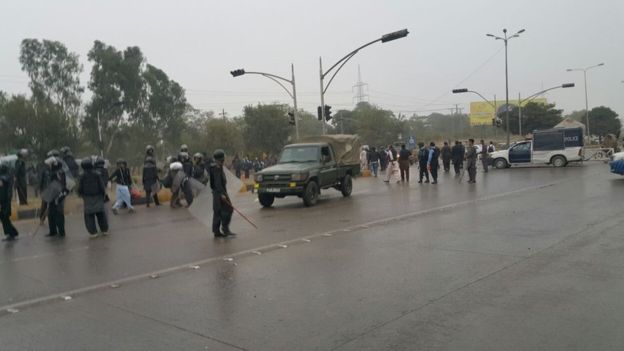 PESHAWAR, 18 November: Minister for Interior Ahsan Iqbal on Saturday ordered the administration to give protestors blocking the Faizabad Interchange on the merging point of Rawalpindi and Islamabad 24 more hours to end the sit-in which has paralyzed the twin cities for 12 days.

Ahsan Iqbal said he wants the protest to end peacefully, but added that implementation on the court order to disperse the protestors will be started after 24 hours. The minister also called upon religious leaders and scholars to play their role in ending the stalemate.

Earlier, the administration completed all arrangements for operation to disperse the protesters as their previous deadline to vacate the place ended at 10:00am on Saturday. However, the interior minister has now extended the deadline by 24 hours to give the protesters another chance to leave the place peacefully. The administration has deputed 5,800 police and FC personal near the venue of the sit-in. Armed personnel carriers and ambulances have also reached the protest venue and policemen are equipped with teargas shells.

Schools, colleges and markets near Faizabad were also closed on Saturday and emergency was imposed in nearby hospitals and leaves of doctors and paramedical staff were cancelled.

The activists of Tehreek-e-Labbaik Ya Rasool Allah are holding sit-in at Faizabad Interchange against changes in Khatm-e-Nabuwwat law and demanding action against people responsible for the changes. They are also demanding resignation of Law Minister Zahid Hamid.

The government says it has restored the law in its original shape after which there is no logic behind continuation of the protest.