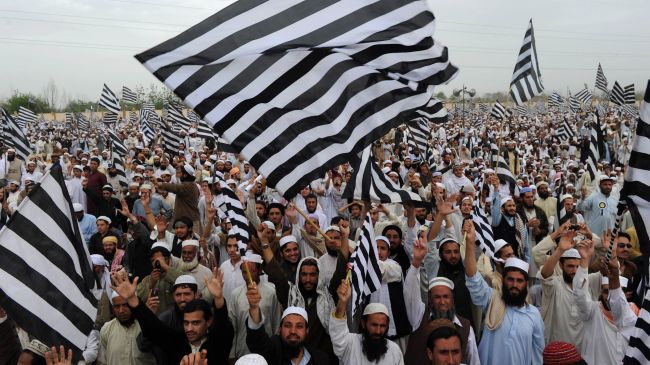 PESHAWAR: The opposition parties have excused from attending the million march of the Jamiat Ulema-e-Islam-Fazl (JUI-F) against the government which will be held in Peshawar.

The JUI-F had originally planned a massive rally in Peshawar on July 14, but its date was changed by the party chief Maulana Fazlur Rehman to July 25 as other opposition parties had announced to observe black day on July 25 on completion of one year of the Pakistan Tehreek-e-Insaf (PTI) government. Fazlur Rehman had invited main opposition leaders to attend the million march on July 25, but they have turned down the invitation and suggested that separate rallies of opposition will be more effective.

After the opposition’s refusal, now two separate massive rallies will be held in Peshawar on July 25. The first rally of the opposition will be held near the Motorway at 11:00am as part of the ‘black day’. The Pakistan Muslim League-Nawaz (PML-N) President Shahbaz Sharif is expected to address the rally. In case of his unavailability, PML-N senior leaders Ahsan Iqbal and Khawaja Asif will address the rally. The Awami National Party (ANP) President Asfandyar Wali Khan, Qaumi Watan Party (QWP) chief Aftab Ahmed Khan Sherpao, Pakistan People’s Party (PPP) leaders Farhatullah Babar and Raza Rabbani will also address the rally and Maulana Fazlur Rehman will also participate in the opposition gathering.

After the joint opposition rally, the JUI-F will hold a separate rally at the Ring Road at 3:00pm. Maulana Fazlur Rehman and other party leaders will address the rally. Sources in the JUI-F said holding of two massive rallies was a difficult decision which was taken after the opposing leaders excused from attending the rally. The sources said the opposition parties were of the view that two separate rallies will be more effective than a single rally.