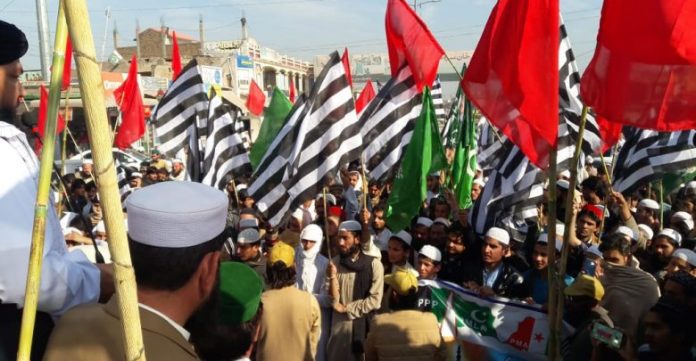 BARA: The Jamiat Ulema-e-Islam-Fazl (JUI-F) activists on Saturday held a protest demonstration in Bara Bazaar in Khyber tribal district to condemn the desecration of the holy Quran in Norway and against the government policies.

Participants of the protest were holding banners and placards inscribed with slogans against the desecration of the holy Quran.

The JUI-F local leaders while addressing the gathering said the sacrilege of the Holy Quran in Norway hurt the sentiments of Muslims throughout the world. They demanded strict punishment for the culprit involved in the heinous act.

The protesters said the government has failed to fulfil promises made with the people of merged districts at the time of merger of erstwhile Fata with Khyber Pakhtunkhwa. They alleged that the mineral resources of the merged districts were usurped in the name of merger.

The JUI-F leaders also took strong exception to the activities of Peshawar Police in Bara. They said Peshawar Police must stop their actions in Bara, otherwise, people will stand up against these actions.

Prominent among those who attended the opposition parties’ protest were Al-Haaj Shamsuddin and Mufti Kafeel from the JUI-F, Zahir Shah and Asghar Khan from the PML-N and Siddique Chiragh and Haji Shireen from the ANP.

Muhammad Sadiq, deputy ameer of the JUI-F for tribal districts, said while addressing the protesters that the JUI-F will hold protests on weekly basis against the government under the directions of the senior party leaders. The Pakistan People’s Party (PPP) and ANP activists also participated in the protest.

Member KP Assembly from Mohmand and ANP leader Nisar Mohmand said while addressing the gathering that the government made tall promises at the time of the merger. However, he said, none of the promises has been fulfilled so far.

The ANP leader said the government was burdening the tribal people with huge taxes despite the fact that the area is exempt from taxes. He said the bill passed by the KP government to take over the mineral resources of merged districts is against the business rules of the assembly.