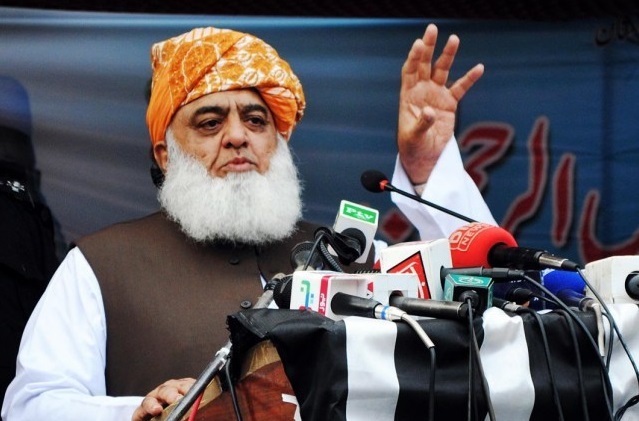 PESHAWAR: Maulana Fazlur Rehman, head of Jamiat Ulema-e-Islam -Fazal (JUI-F), has said that in a couple of days, he will announce the date of ‘Azadi March’ towards Islamabad and will not give Imran Khan an NRO.

Speaking to media in Lahore, the JUI-F said, “We hope that the decisions taken with opposition parties will be followed and you will see that everyone together to topple the government of Pakistan Tehrik-e-Insaf (PTI).”

Fazal was talking to media after meeting with Pakistan Muslim League-Nawaz President Shehbaz Sharif at his residence to chalk out a strategy for the upcoming Azadi March. Both the leaders also discussed the possibility of calling an All Parties Conference over the country’s worsening economic and political situation.

When asked the support of other political parties for the march he said that even if no other party joins him, he can gather millions of people from across the country for the march. “We have already done 15 million marches before this and have the ability to march alone,” he said. “This march is for the protection of Namoos e Resalat, against inflation, and injustices going on in the name of accountability in the country.”

Head of JUIF expressed that the whole nation has trapped in inflation and other issues and the ‘illegitimate’ government is responsible for it and unable to bring out the country from this chaos.

Maulana Fazlur Rehman said that the final date of the march would be decided in a couple of days and the ‘Azadi March’ Strategy will be formulated and announced soon after consultation with the coalition parties.  Talking about the Jamiat Ulema-e-Islam India’s support of India over Kashmir, he said that it is its own decision and JUI-F is standing with Pakistan.

On the other hand, Special Assistant to Prime Minister on Information and Broadcasting Dr Firdous Ashiq Awan urged Jamiat Ulema-e Islam (F) leader Maulana Fazlur Rahman to march for the freedom of Kashmiris, “not for those who have looted and plundered national wealth.”

She added, Fazl claimed to be a champion of democracy but now he was trying to topple the system. “Where all his principles have gone?” she questioned.