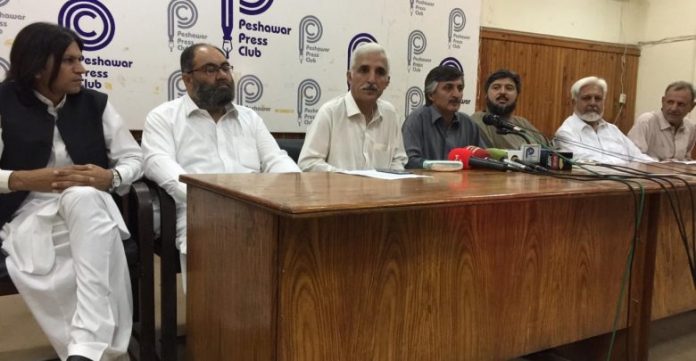 PESHAWAR: The opposition parties in Khyber Pakhtunkhwa (KP) will observe July 25 as black day and will hold all opposition parties gathering in Peshawar, said Sardar Hussain Babak, leader of Awami National Party while addressing a press conference at Peshawar club on Thursday.

The united opposition’s Rehbar committee council alleged July 25 general election was rigged and just one party. The alleged that just one party was favoured in the election and no level playing field was provided all the political parties before the election. They further accused that the public mandate was violated due to which they will observe the day as a black day.

Asif Iqbal Daudzai of Jamiat Ulema Islam-Fazal (JUI-F), Tariq Khan of Qaumi Watan Party and other political leaders were also present during the press conference.  The opposition parties announced that on the morning of July 25, the opposition parties will hold a mega rally on the motorway Chowk in Peshawar in which the workers and leaders of all the political parties will participate.

“It was a black day. They’ve stolen the public mandate. The states’ political institutions were further weakened,” said Sardar Babak. “A selected government has been imposed on the country, which has made the lives of people miserable after just one year of government.”

Asif Iqbal Daudzai of JUI-F said that in the present situation of the country, there is not even a single institution that is free and performs its constitutional duties without any pressure. Daudzai said that on July 13 public and traders across the country have observed a successful strike which shows that the public is fed up of the present government and its policies. He stressed the need that every institution should work within the jurisdiction provided by the constitution.