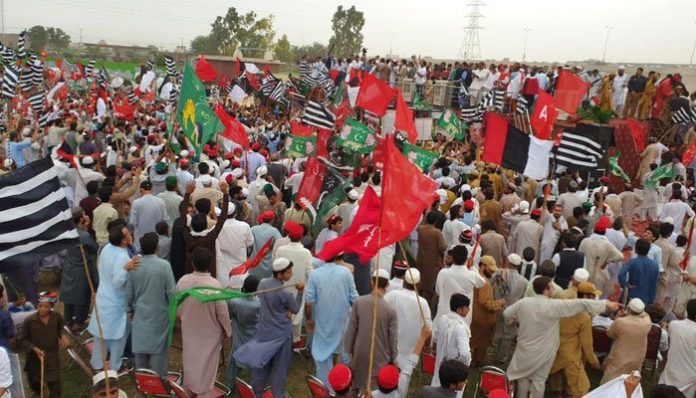 PESHAWAR: The Rahbar Committee of the opposition parties has announced to hold protest demonstrations against the government in all parts of the country from tomorrow (Friday).

This was stated by Akram Khan Durrani, leader of the Jamiat Ulema-e-Islam-Fazl (JUI-F) and Convener of the Rahbar Committee, while talking to journalists in Islamabad on Thursday.

Akram Durrani has made the announcement after the JUI-F has announced end to Plan-B under which roads and highways in different parts of the country were blocked as part of the anti-government protest. Under Plan-A, the JUI-F along with other opposition parties had held Azadi March on Islamabad under which a sit-in was held in Islamabad for several days. Now the countrywide protest demonstrations will constitute Plan-C of the protests against the government of Pakistan Tehreek-e-Insaf (PTI).

Akram Durrani said the JUI-F provincial leadership will meet today to devise strategy for Plan-C under which countrywide protests will be held from tomorrow.

Akram Durrani earlier in the day approached the Islamabad High Court (IHC) for extension in his bail plea in the National Accountability Bureau (NAB) cases.

On November 12, Akram Durrani appeared before the NAB Rawalpindi to submit reply on three inquiries against him including assets beyond means, fake recruitments and illegal land allotments.

The students of Swabi Women University have suspended their protest for three days on assurance of the vice chancellor to look into their demands.

The female students were boycotting their classes in Swabi Women University since Monday over removal of male teachers, including some PhD teachers.

The protesting students had alleged that the university administration was removing very capable teachers, including some PhD teachers.

The protest of student brought the academic activities at the university to a halt after which the administration intervened and assured the students that their demands will be considered.