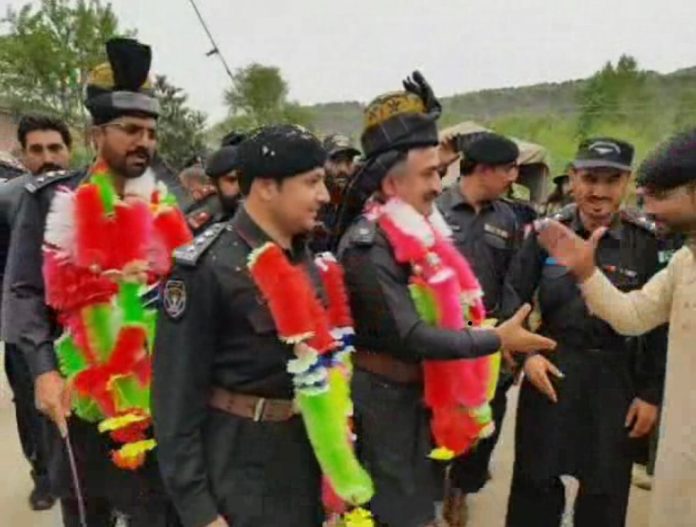 ORAKZAI: After the merger of Khasadars and Levies forces with Khyber Pakhtunkhwa (KP) Police Department, District Police Officer of Orakzai arrived in the district to take charge of his office.

On the main gate of Orakzai Headquarter, DPO Salah Uddin Kundi was warmly received by Khasadars and Levies men on Friday.

The DPOs while talking with media persons said that all suspended men of Khasadars and levies forces have been restored and were asked to join their duties.  Kundi added that all the Levies and Khasadars forces men in all the tribal districts will now work under the KP Police department. Kundi maintained, unlike past, now they will be given salaries and other incentives at par with the KP Policemen of all other districts of the province.

The newly appointed DPO of Orakzai district maintained that Provincial government, Pakistan Army, KP Police department has heard the grievances and their demands were accepted. Kund expressed that it is a historical day and ensured that with the passage of time, the Khasadars and Levies men will enjoy fruits of the merger.

The chief minister, Khyber Pakhtunkhwa had constituted an apex committee comprised of officials of provincial government, Army officials and representatives of KP police, who have conducted meetings with protesting Khasadars and Levies personnel and accepted all their logical demands. After successful dialogues, the KP government issued a notification merging all the 28000 Levies and Khasadars men of tribal districts with KP police department within six months.

The newly appointed DPO of Orakzai District remarked that a tree of KP police force has been planted in tribal districts of the province, which were under the colonial law of FCR since the creation of Pakistan. Kundi expressed the hope that it will bring a good omen and will gradually bear fruits for the people.