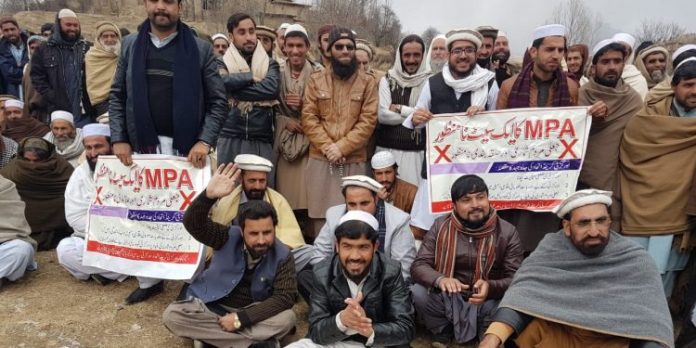 KALAYA: The Orakzai Grand Alliance on Saturday organised a Jirga and protest demonstration in Meshti Mela area of Central Orakzai against flaws in the recent population census and delimitation of constituencies.

The tribesmen chanted slogans against the census and delimitation of constituencies. They said two provincial assembly seats should be given to the area and its status of district should be maintained, otherwise, they will continue their protest. They said they will boycott the provincial assembly elections and stage a sit-in in front of the Prime Minister House if their demands were not accepted.

Members from 18 tribes attended the Jirga and protest of the Orakzai Grand Alliance in Meshti area of Central Orakzai. Participants of the protest were carrying placards inscribed with slogans in favour of their demands. The participants of the rally marched from Meshti Mela Bazaar to Lower Orakzai. They said they will not accept the current delimitation and only one provincial assembly seat for the area.

The tribal elders said these figures are like a joke with the tribesmen of the region. They said the population census was carried out in Orakzai tribal district at a time when most of the people of two sub-divisions of Upper Orakzai and Central Orakzai had left the area due to law and order concerns and they were living as temporarily displaced persons (TDPs) in other parts of the country.

The Jirga elders said the people of Orakzai offered countless sacrifices in the war against militancy and bringing peace back to the region, but in return they were just given one provincial assembly seat due to flawed census figures. They said the area is likely to lose its only National Assembly and Senate seat in the coming elections, which is big injustice with the people of Orakzai. They urged the sitting and former lawmakers of Orakzai and all the tribes to initiate a joint movement for the rights of the region.

The Jirga formed three committees to raise the issue at different forums and create awareness among the people hailing from Orakzai about their rights.