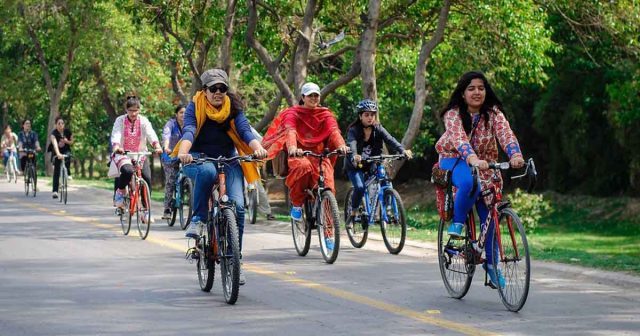 PESHAWAR: The cancellation of a “Cycle Rally for Transgender and Females” is challenged in the Peshawar High Court, seeking direction to the provincial government to facilitate the organizer to re-arrange the rally in the city.

The petition is submitted by the CEO of Pak development mission, Zertashia Jamal through senior lawyer Barrister Masroor Shah arguing that Women are equal citizens of the county thus no one should be given a license to tremble upon their constitutional rights in the garb of religion.

The Petitioner has organized a “Cycle Rally for Transgender and Females” on 19th January 2019 in Hayatabad, Peshawar which was cancelled by the Deputy Commissioner after members of religious parties threaten to stage a protest against it.

“The district administration should not have succumbed to few bigots,” said the petitioner in her petition. “The Constitution further ordains that no person shall be prevented from or be hindered in doing which is not prohibited by law and no person can be discriminated on the basis of sex.” The petition further said that the inaction on part of respondents in performing their statutory and legal duty is infringing upon the basic rights of the petitioner.

Through the petitioner, Ms Zartashia, informed the court the administration has already provided permission to hold really, therefore, barring the petitioner from organizing “Cycle Rally for Transgender and Females” in Hayatabad as illegal, unlawful and unconstitutional.
The court is asked to direct the Respondents, Deputy Commissioner and KP government, to facilitate and provide adequate security to organize the Cycle Rally for Transgender and Females in terms of permission previously granted.

They request the court to take strict action in according to the law against anyone indulging in intimidation against the holding of a lawful activity namely Cycle Rally for Transgender and Females and hurling of threats to its organizers and participants. They asked the court to direct the administration to treat the women and Transgender of Peshawar in accordance with the law and extend to them equal protection of the law.