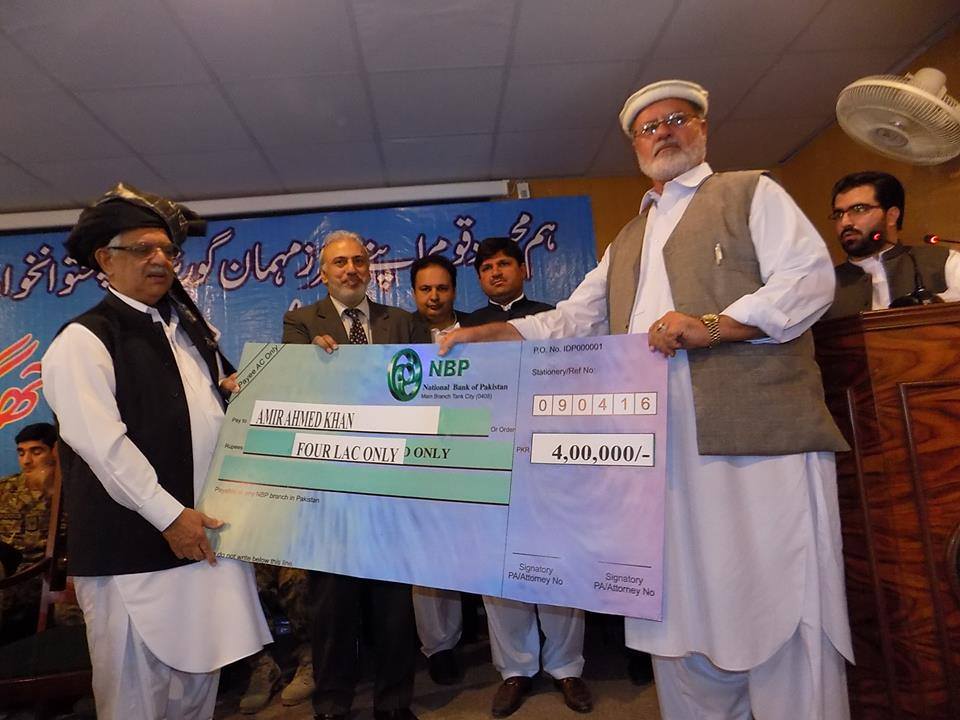 The military offensives in tribal areas have brought peace back as the Taliban and other militant groups have been cleared from the Pak-Afghan border region. However, these operations and conflicts rendered thousands of houses damaged in Federally Administered Tribal Areas (FATA).

The devastation is not limited to houses and a single tribal district. Thousands of shops, business centers, health facilities and education institutions are damaged from Waziristan to Kurram and from Khyber to Bajaur. The main challenge ahead is the rehabilitation of infrastructure and reconstruction of damaged houses and shops.

According to government officials, billions of rupees have been allocated for the reconstruction of damaged houses and other properties. The government has announced to give compensation to the affected people at a flat rate. It has fixed commendation amount of Rs400,000 for the completely damaged and Rs160,000 for partially damaged houses.

In the first instance, the damages assessment surveys have been completed in some areas while in others, the process has been running by the Fata Disaster Management Authority (FDMA).

The governor distributed compensation cheques among 80 tribesmen in a ceremony held in Cadet College, Chaghmalai during his visit to the agency. The local tribesmen who received the cheques express contentment and say it will help them reconstruct their houses. 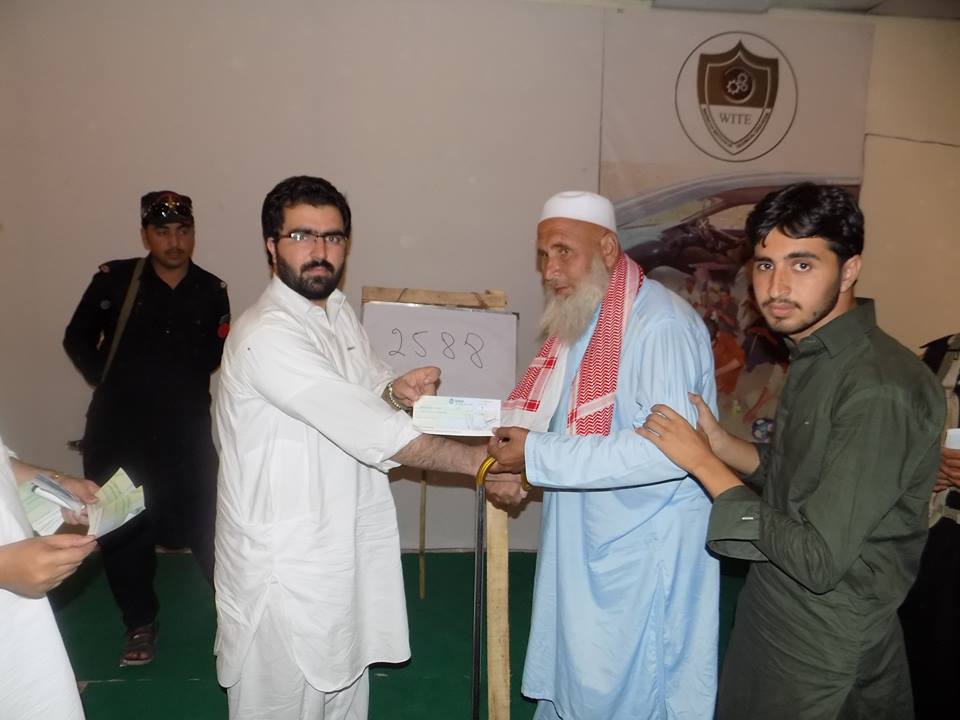 “The survey team had come to our area and assessed the damages. I am very happy for the compensation amount,” says Amir a resident of South Waziristan. Some tribesmen complain about the mode of payment saying, the government should either give them cash money or open cheques.

“The payment is being made through crossed cheques due to which we have been facing problems in getting the money. We have been shuttling to and from between the bank and the FDMA offices,” complains Hikmat, a resident of the agency. Referring to the compensation amount , some of the tribesmen are of the view that something is better than nothing, others complain it is insufficient.“It takes lot of time and money to rebuild a house in an area like Waziristan. With this meager amount, one can only build a wall not a damaged house,” remarks another tribesman. He says the government should increase the amount of compensation so that the tribesmen can be helped out in reconstructing their homes.

However, there are areas where the process of giving compensation amount to the affected tribesmen is yet to be started. Taj Muhammad, who is a resident of North Waziristan, says the damages surveys were done in Zerenay and Karkanry areas but he is not sure when he will get the compensation amount. “The survey teams came here. They visited different villages, took photographs of the damaged houses. We do not know how much funds will the government release for us,” Taj Muhammad says.

Muhammad Ayub also shares the same views and says that the survey in his village  was done long ago but the process of provision of compensation amount is yet to be started. Noor Muhammad Khan, also a resident of North Waziristan, says he doesn’t know whether the survey is done. But he admits electricity supply to his village has been restored now. 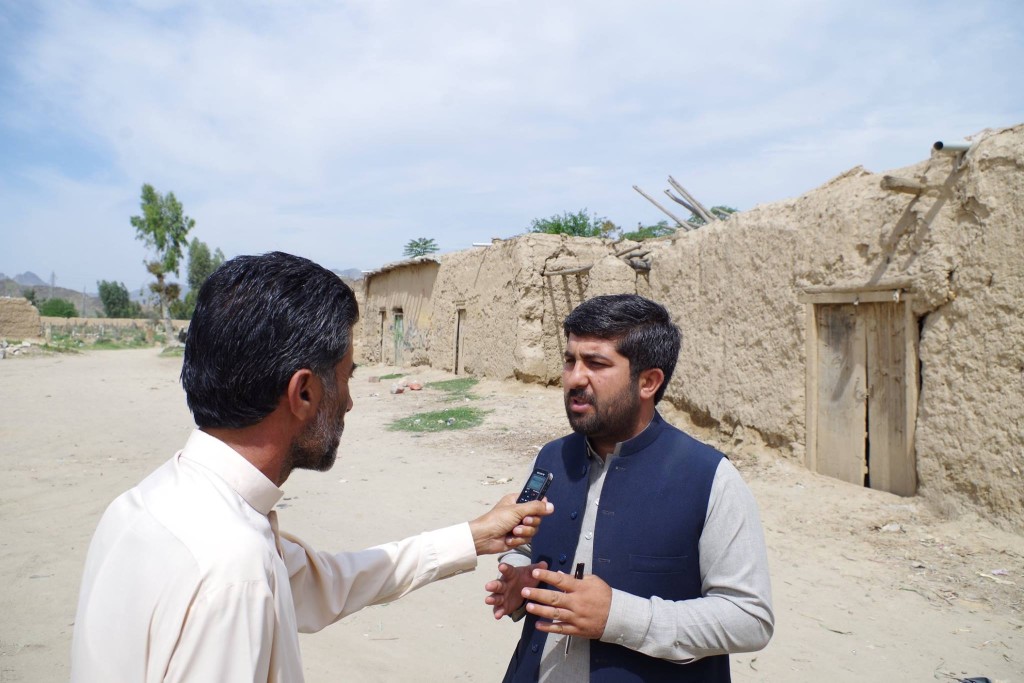 Jehandad is yet another tribesman from North Waziristan who says there is no survey done in his native village. “I have two houses – one in Shogi Peerakhel and other in Ziarat Kali. Large number of houses were damaged in both villages but no survey has been done in either village,” he informs.

Contrary to the statements of people, the Fata Disaster Management Authority (FDMA) says the survey process has begun simultaneously in different areas of North Waziristan Agency. “More than 4500 damaged houses have been registered in Boya, Eidak, Shameeri and Mir Ali areas and the owners of these damaged houses will soon get the compensation amount,” an FDMA official says.

Tribesmen in Mohmand agency say only 30 percent areas have been surveyed in the agency. The local tribesmen allege that fake entries have been made in the survey. “Some influential people attempted forgery and mention someone else’s houses in their name to get the compensation amount,” alleges a tribesman.

Similarly, residents of Central Kurram also complain that hundreds of houses were damaged in Para Chamkani, Khooni Khel, Khwajak, Tabai, Passmela, Daud Khan and other surrounding villages, but nobody has bothered to visit the area and asses the damages.

Malik Khaista Gul from the Orakzai tribal agency says no survey teams have visited his area.

However, the grievance is common amongst almost all the tribesmen that the compensation amount is too little. Zahid Iqbal is one of the many such residents of Mir Ali subdivision who suffered millions of rupees losses in terms of damages to property. 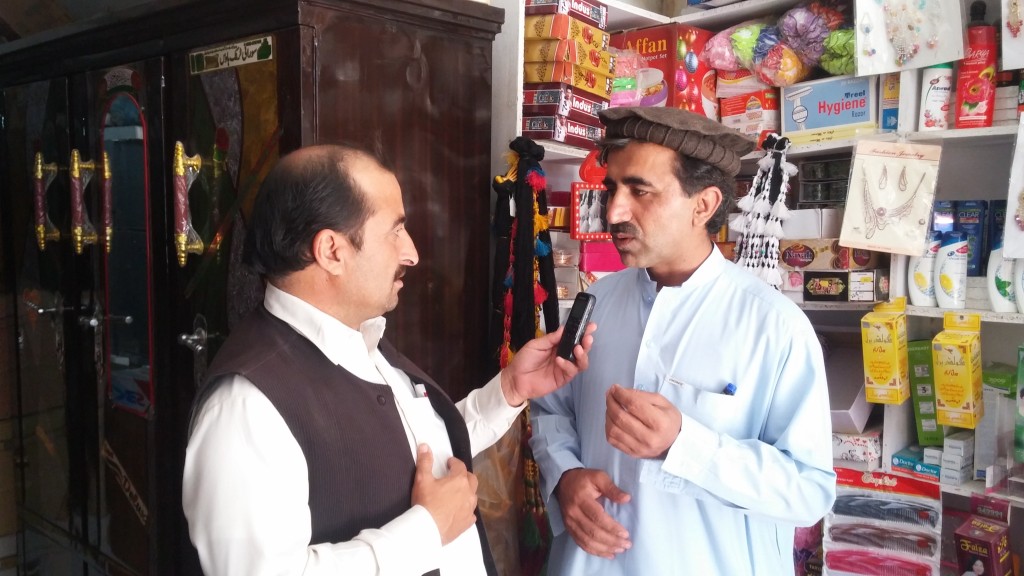 “I had few shops in Mir Ali bazaar and a very profitable business. Besides, I have a large house sprawled on about three kanals of land. I had spent about Rs12 million on its construction back in 2006. But now everything has been converted into rubble after the military offensive was started against the militants in the agency,” Iqbal recalls.

He says he is feeling upset over all this mess. “Now it is impossible for me to rebuild the house again. It will definitely cost me 20 to 25 million rupees if I raise it again,” he thinks.

Zahid Iqbal says he is not the only person in the Hasso Khel tribe who has been suffering from this tragedy. “Almost every person is passing through the same situation. Everybody here had a world of his own. But now everything is ruined.” In my opinion, the Rs400,000 compensation is insufficient for a room to be built as prices of everything has gone high, he says. Zahid suggests that the government should announce compensation amount as per the damages one has suffered.

The FDMA says that more than 2000 damaged houses have been registered in the surveys conducted in Bara subdivision of the Khyber Agency. The authority says the provision of compensation amount will be started after the completion of the surveys.

The local people have expressed happiness over the launching of the survey process. “Yes we are happy that the damages are being assessed here. We want that every single person should be compensated,” says a local resident of Bara. 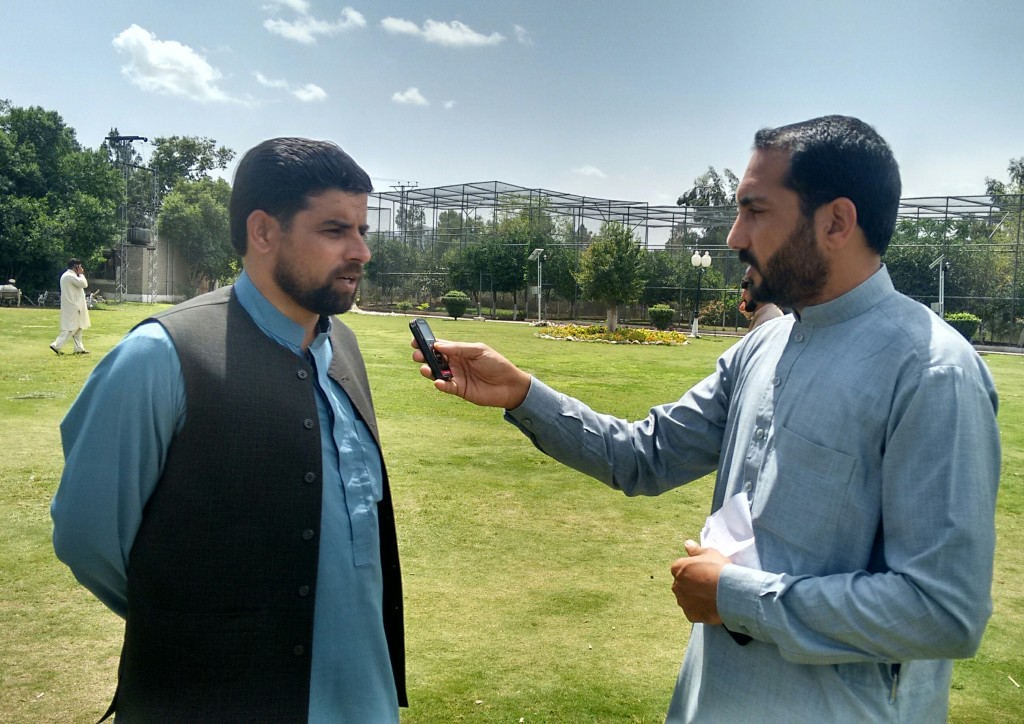 However, Asghar Khan, a member of Shalobar tribe says he is not satisfied from the survey process because he thinks the survey teams have skipped large number of people in the registration process.

“The relevant authorities should carry out another survey in the area as large number of deserving people have been missed in the initial report,” Khan says.

He informs that the survey teams visited Arjali Nadi and Soor Kas areas but nobody has come to the Jamrud road side.

“The government should conduct a survey in which every deserving person should be registered without any discrimination,” he adds.

Likewise, a resident of Bara, Khyber Agency informs that survey teams did visit a part of Aka Khel’s tribe area but marked four or five houses as damaged. “Survey teams visited a small part of Aka Khel tribe’s area and registered a few houses after which they abandoned the task. Large number of damaged houses are overlooked by the survey teams. The surveyors deliberately declined to add the damaged houses as they were saying that these are demolished due to rain or other natural catastrophe,” the tribesman says. 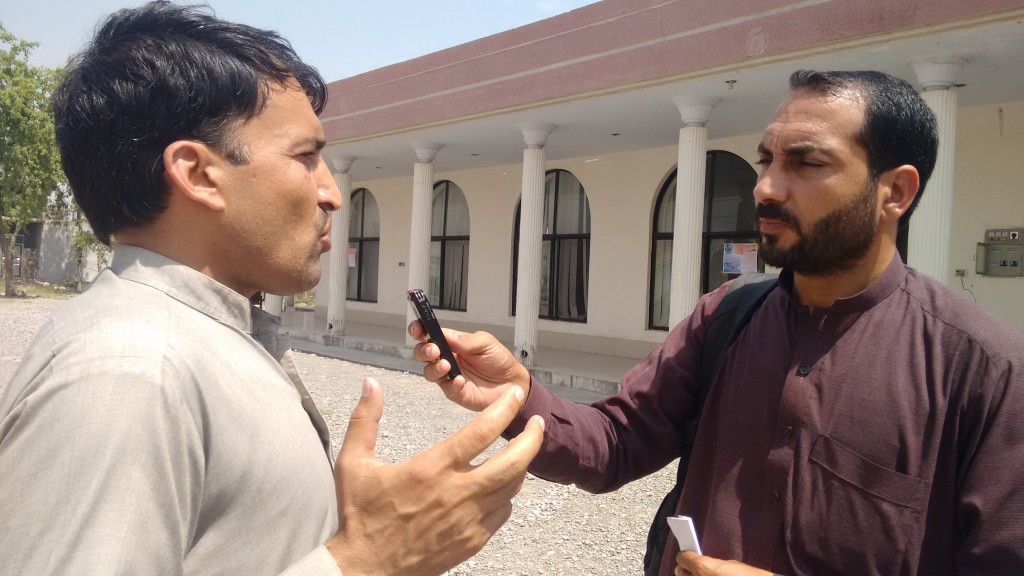 Maqbali Khan, a resident of Malik Din Khel area has a different type of complaint. He says major portion of his house has been damaged in the operation but his name has been entered in the list of partially damaged houses.

“We request the relevant authorities to provide full compensation to the affected tribesmen as they have limited resources to restart life afresh,” Maqbali Khan appeals.

Meanwhile, assistant political agent of Bara subdivision Muhammad Arif has said the process of providing compensation amount to the affected tribesmen will be completed in a transparent manner and no discrimination will be done in the disbursement of compensation amount. 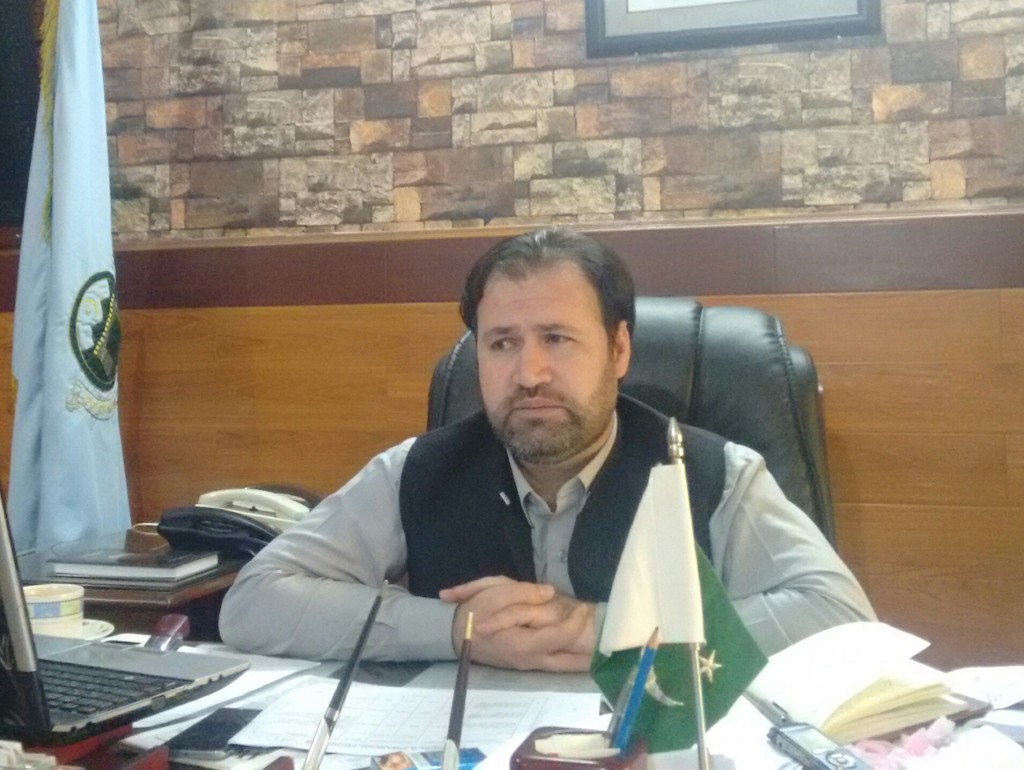 “The survey process has been completed in Aka Khel and Shalober areas and it will be completed in a few days in Sipah area of the Bara subdivision. Similarly, surveys have been done in Zakha Khel area in Tirah Maidan while the same is in final stages in the jurisdiction of Malik Din Khel tribe. The process will continue till all the damaged houses are registered in Tirah,” he informs.

Mr. Arif updates that the survey teams are being supervised by tehsildar and deputy tehsildar while representatives of local jirgas, personnel of the Pak Army, officials of the Communication and Works (C&W) department and a school teacher are also made part of the survey teams.

“These teams visit different villages and assess every house if it is damaged due to militancy? The teams then collect required data about the damaged house and the owner and take his photographs. This data is further submitted to the administration on daily basis for onward submission to the Fata secretariat,” the official elaborates.

The assistant political agent maintains that the jirga members have been advised to make sure that owners of the damaged houses are present at the time of assessment.

“If the owner of a damaged house is not present at the time of the survey, it will not be registered as per government policy, the owner is required to be photographed along with members of the survey team at the site of the damaged house,” he explains.

The official further explains that after the completion of the survey process, all the lists will be published in local newspapers and official websites of the FDMA. Besides, these lists will also be displayed on prominent places in the relevant areas.

“With the publication of these lists, it will be easy for a person to register complaint in case his name is not included in the registration process. The person(s) can give an application to the political administration for the inclusion of his names in the lists of registered affectees. His name will be included after proper verification by the survey teams,” Mr. Arif adds.

The official says that the government wants to start provision of compensation amount to the affected tribesmen as soon as possible.