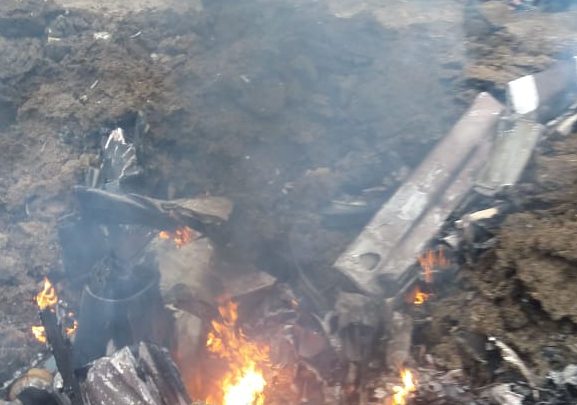 MARDAN: A training aircraft of the Pakistan Air Force (PAF) crashed in Asif village of Takht Bhai tehsil in Mardan on Wednesday.

According to Rescue 1122 sources, the plane of Risalpur Training Academy crashed during a flight. Pilot of the plane suffered minor injuries in the crash as he ejected safely. He was shifted to hospital through a military helicopter after first aid in ambulance.

The plane caught fire as it crashed in the village of Mardan district which was doused after hectic efforts.

A spokesperson for the PAF said a board of inquiry has been ordered by the Air Headquarters to determine the cause of accident.

It was third PAF training aircraft crash incident during routine training missions in less than two months. On last Friday, a PAF Mirage plane on a routine operational training mission crashed near the Lahore-Multan Motorway in Punjab. The pilot ejected safely in that incident.

In January, a PAF plane crashed during a training mission near Mianwali in Punjab. Pilots, Squadron Leader Haris bin Khalid and Flying Officer Ibaadur Rehman, aboard the PAF FT-7 aircraft, lost their lives in the crash.

Seven persons of a family received burn injuries in a blast due to gas leakage in Nowshera on Wednesday.

TNN correspondent reported that the incident happened in Lajbar Colony in Pabbi tehsil. Those who sustained burn injuries include head of the family, his wife and children.

Several incidents of blasts and suffocation due to gas leakage have happened in different parts of the country, particularly in Khyber Pakhtunkhwa, during winter in which many people lost their lives.

On January 31, five friends sleeping in a guest room died due to gas leakage in Abbottabad.

The friends had gathered to go for picnic the next day and were sleeping when they were suffocated due to gas leakage.