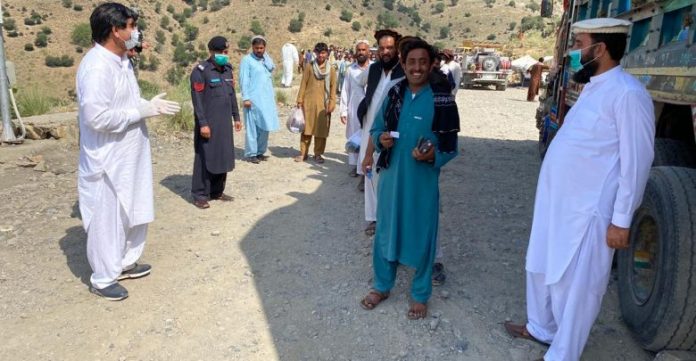 MIRANSHAH: The Pak-Afghan border in Ghulam Khan, North Waziristan, has been reopened for pedestrians.

Deputy Commissioner Shahid Ali said the border has also been opened for those travelling on foot from Sunday after which the people stranded on both sides of the border due to coronavirus will now be able to reach their destinations on the either side of the border.

The deputy commissioner said hundreds of people were stranded in Khost province of Afghanistan and North Waziristan tribal district due to coronavirus lockdown. He said the stranded people are being allowed to enter North Waziristan through Ghulam Khan border after verification.

The deputy commissioner said the stranded people included transporters and women and children. He said all the facilities are available at quarantine centre for people arriving from Ghulam Khan border. He said Tehsildar Ghaniur Rehman and other staff is available at the border to facilitate the passengers.

Few days earlier, Ghulam Khan border was reopened for trade activities after closure of three months due to coronavirus.

On June 18, a flag meeting between the Pakistan and Afghan border officials was held during which it was decided to reopen the border. A day earlier, the district administration and police officials visited the Ghulam Khan border and monitored the available facilities.

The traders of North Waziristan had recently demanded reopening of Ghulam Khan border and also staged protest. Last month, the transporters of North Waziristan had called upon the government to make arrangements for return of their colleagues stranded in Afghanistan. The local transporters gathered in Khajori area and staged protest in a traditional manner by dancing on the drumbeats. The protesters had said over 200 Pakistani drivers were stranded in Afghanistan due to coronavirus lockdown and closure of Ghulam Khan border. They said the drivers were stranded there for the last three months. The border was eventually reopened for trade on June 22.

Meanwhile, a protest was staged in Wana Bazaar of South Waziristan against the closure of Pak-Afghan border gate in Angoor Adda.

The protesters said the Angoor Adda border gate must be reopened for trade activities and other people on the pattern of Torkham and Chaman border. They said the people stranded on both sides of the border are facing difficulties due to closure of the border gate.