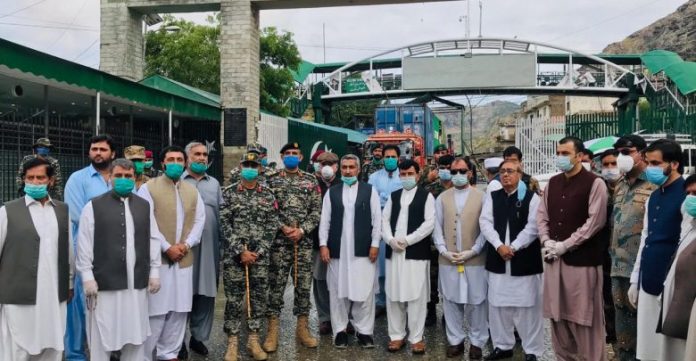 LANDIKOTAL: The Pak-Afghan border flag meeting was held at Torkham border on Thursday to discuss the issues regarding accelerating clearance of stranded vehicles on both sides of the border and improving facilities for bilateral trade.

The meeting discussed the letters sent to Pakistan by the Afghan government and Afghan embassy in Islamabad regarding re-opening of Torkham border on 24/7 basis. The issues of stranded vehicles on both sides of the border and detention and demurrage were also discussed during the meeting. Officials from both sides presented proposals for making the border operational 24/7 again. It was agreed that the proposals will be forwarded to the concerned governments and decisions will be taken in great public interest.

Shahid Shinwari while responding to questions raised during the meeting said that no other country can give such level of concessions which have been given by Pakistan to Afghanistan for transit trade. He assured that all the difficulties faced by the Afghan brothers will be resolved with mutual consultations. He said there is a problem relating to unavailability of trackers. He said the Pakistan government must consider credentials of other tracking companies as well to ensure healthy competition. He said cooperation will continue from Pakistan side for improving the pace of clearance of vehicles.

Colonel Bilal assured the Afghan delegation that he will convey their proposals to the government soon after the meeting. He hoped that good news about progress on the proposals will be shared soon. On the occasion, participants from both sides prayed for well being of people of both the countries.

Few days ago, senior Customs clearance agents had demanded increase in the number of transit trade vehicles at Torkham border.

Meanwhile, the transporters of North Waziristan demanded opening of Ghulam Khan border so that the stranded transporters on the Afghan side could come back to Pakistan.