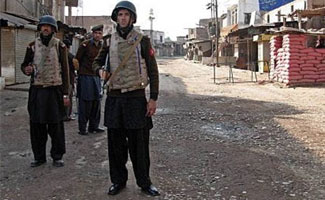 MIRAN SHAH: The Pakistan Army has announced on Wednesday lifting of curfew permanently that would be imposed every week throughout North Waziristan as peace has been restored to the area.

Talking to reporters, Major General Mumtaz Hussain said that curfew would not be imposed without any reason as peoples’ movement would not be restricted in the area.

After military operation Zarb-e-Azb, army would imposed curfew every Sunday in North Waziristan restricting people’s movement and no one would be allowed to come out of their homes.

The announcement is widely welcomed and locals took a sigh of relief as they would move freely in their own land and without any check.

They were not allowed even to take their patients to hospitals when curfew was in place for which they would have to take permission from military authorities that would take three to four hours.