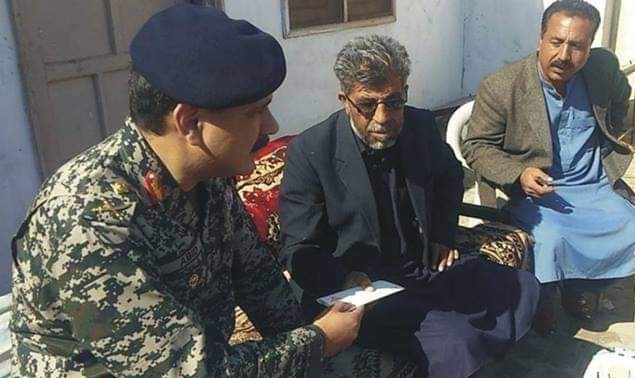 The senior journalist from South Waziristan is suffering from kidney disease for a long time. General Latif has presented a cheque of Rs 0.3 million on behalf of the Corps Commander Peshawar, Lieutenant General Shaheen Mazhar Mehmood.

Senior tribal journalists and other security officials were also present on this occasion. The ailing journalists thanked the general for the visit. Senior tribal journalist Awar Din Mehsud, who was present on this occasion, said that tournalist Javed Noor has been passing through a very difficult time for a long time as he is suffering from kidney disease and has spent all his earnings on his medical treatment.

He said that the tribal journalists appreciate this step of the Frontier Corps and park army.

BAJAUR: Member National Assembly Gul Dad Khan has said that the federal government has promised Rs150 million funds for development projects. Gul added that only community-oriented development schemes would be included in the development programme in Bajaur tribal district.

He was addressing a workers’ meeting in NA-40  constituency here in Khar on Wednesday that was attended by residents and notable of different areas in large numbers, besides scores of PTI workers.

The lawmaker said the PTI lead federal and provincial governments were committed to launching community-based development schemes in the district in order to facilitate general public through their active participation in these projects.

In the past, the MNA alleged that most of the development schemes had been given to selective people instead of community. Senior party leaders, notable and elders have also addressed the gathering and informed the MNA about the issues faced by the people of the district.