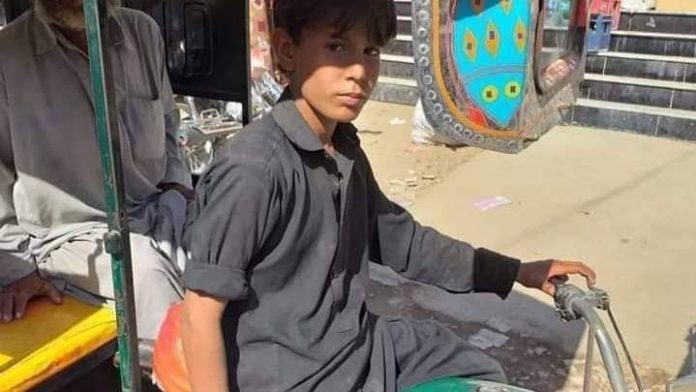 DERA ISMAIL KHAN: Atif Mehsud, who used to run a rickshaw on the roads of Dera Ismail Khan to make ends meet, will now go to school thanks to the Pakistan Army.

Atif Mehsud used to run a rickshaw in Dera Ismail Khan to support his poor family. However, his dream of getting education will be fulfilled now with the help of Pakistan Army and he will now go to school.

The situation of Atif Mehsud was highlighted on the mainstream and social media after which Station Commander DI Khan Brigadier Shamrez Khan went to his house and provided cash grant to him on behalf of the Pakistan Army. Brigadier Shamrez also said that the Pakistan Army will now bear the education expenses of Atif Mehsud and his father, who is bed-ridden for the last two years due to illness, will also get free of cost treatment.

Brigadier Shamrez Khan said the Pakistan Army has taken notice of the difficult situation the family is bearing for long time, and now every possible help will be extended to the family. He hoped that the life standard of the poor family will improve after Atif Mehsud gets education and his father gets proper medical treatment.

The father of Atif Mehsud thanked the Pakistan Army for helping his family in difficult time. He said he is extremely happy that his son will now go to school like other children. He said he has a dream that his son gets higher education and contributes positively towards building a bright future for the country. He said it would not have been possible without the help of the Pakistan Army.

Pakistan has strongly condemned the bomb blasts in a mosque in Nangarhar province of Afghanistan, in which over 60 people lost their lives and many others were injured.

The Foreign Office spokesman said in a statement said Pakistan condemns terrorism in all its forms and manifestations and stands in solidarity with the government and people of Afghanistan in their fight against terrorism.

The Foreign Office said that Pakistan shares the grief of the bereaved families and offers deepest sympathies and condolences over their loss in this mindless act of terrorism.

“Our prayers are with the victims and their loved ones in this difficult time,” said the spokesman.