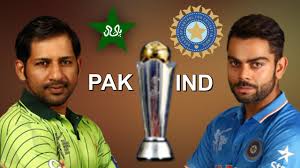 PESHAWAR, 17 June: Cricket fans from India and Pakistan have switched sides on social media and started heated debates ahead of the dream final of the ICC Champions Trophy 2017 between the archrivals at London’s Oval ground on Sunday.
The social media users from India and Pakistan had started creating different trends on twitter e.g. #Pak-Indiaaikjeetaur and so many other trends regarding the CT final. The cricket fans continued to engage on social media and express their opinions over the much-awaited clash between the two strong teams of Asia.
Fans from the cricket-mad nations have also swapped support for their teams on Facebook, with Indian and Pakistani users posting profile pictures with their rival’s colors.
Social media users in Pakistan, especially Twitteraties, continued to batter the former India cricketer Virender Sehwag and Indian actor Rishi Kapoor days after they indulged in some banter with Pakistani fans by their mocking tweets regarding Sunday’s ICC Champions Trophy final.
Pakistani cricket fans, who were clearly annoyed with Kapoor’s poisonous remark, gave him a befitting reply that prompted Kapoor to post more tweets over-confidently.
The Twitter war has begun ahead of the much-awaited sensational clash between cricket arch-rivals Pakistan and India for ICC Champions Trophy title at London’s Oval ground.