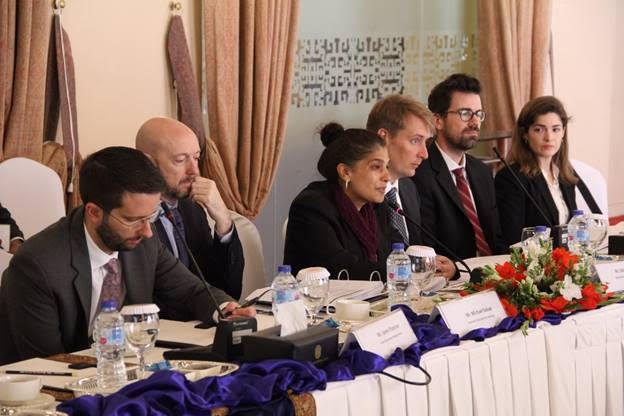 PESHAWAR: As part of ongoing efforts to create jobs opportunities and economic growth in both the countries, Pakistan and the United States on Thursday held regular consultations under the US-Pakistan Trade and Investment Framework Agreement (TIFA).

The goal of the TIFA meetings is to expand bilateral trade and investment in both goods and services, says a press release of the US Embassy in Islamabad.

At the meeting in Islamabad, both sides discussed ways to improve access for products, such as agricultural goods and medicines, in each other’s markets. Additionally, given the growth in the digital economy in both countries, discussions about how to improve services and digital trade between the United States and Pakistan took place. While both sides desire to strengthen digital trade, the two sides also looked at ways to strengthen intellectual property rights and the business climate in Pakistan.

Additionally, both sides brought up important topics such as such as economic empowerment for women, labor reforms, and skill development for workers.

Pakistan concluded the discussions with an update on the China-Pakistan Economic Corridor (CPEC) and the special economic zones (SEZs) established under the mega project to encourage trade.

Trade between the United States and Pakistan hit record highs in 2017 and 2018. In 2018 there was over $6.6 billion in trade between the two countries. The United States continues to be Pakistan’s largest market for exports. Sixty percent of Pakistan’s 208 million population is under the age of 25, representing a large and growing market for goods and services. Pakistanis, in general, favor the US technical expertise and products over other countries.

According to Pakistan’s Ministry of Commerce, TIFA envisages enhancing the bonds of friendship and spirit of cooperation between Pakistan and the US. It seeks further promoting bilateral trade and economic inter-relationship and recognises the importance of fostering an open and predictable environment for international trade and investment. The agreement also envisages increased foreign direct investment and encouraging and facilitating private sector contacts between the two countries.

Both the countries under the TIFA have agreed to resolving trade and investment problems expeditiously and to reduce tariffs and eliminate non-tariff barriers in order to facilitate greater access to markets of both the countries.