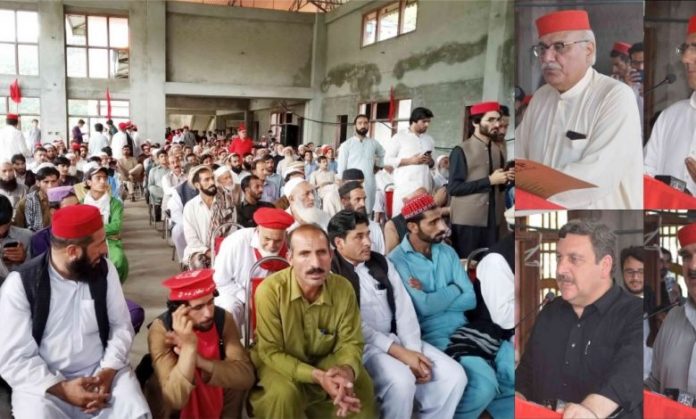 CHARSADDA: A Pakhtun Qaumi Jirga was organised by Mazdoor Kisan Party (MKP) in Charsadda on Saturday which agreed on 21-point agenda.

The Jirga reviewed the abruptly changing situation in Afghanistan, its possible impact on Pakistan, human rights and parliamentary issues. The participants urged the government to review its foreign policy keeping in view the emerging challenges amid the fast changing Afghan situation. The government was also urged to keep a close watch on the situation and keep the security agencies prepared for any challenge.

The MKP leader Afzal Khamosh said on the occasion that all the participants expressed their views freely and decided to launch a joint struggle for fulfilment of promises made with Pakhtuns.

At the end of the Jirga, a 21-point joint statement was issued in which it was stated that support would not be extended to anyone capturing the Afghan government by force. The Jirga said efforts must be made for bringing all the parties to conflict in Afghanistan to negotiating table to resolve the issue peacefully. It said foreign interference in Afghanistan would be condemned at all levels.

The Jirga agenda stated that all the political parties will have to play a role in bringing peace in Afghanistan. A comprehensive program would be chalked out for organising peace rallies in the entire country. The Jirga declared the US and its allies responsible for the current state of affairs in Afghanistan and said efforts must be made to stop the spread of unrest in the war-torn country before it is too late.

The Jirga also discussed the Rs100 billion special package and 3 percent share for merged tribal districts in the National Finance Commission (NFC) Award which was promised by the federal government. The participants said they would continue to raise voice for rights of people.