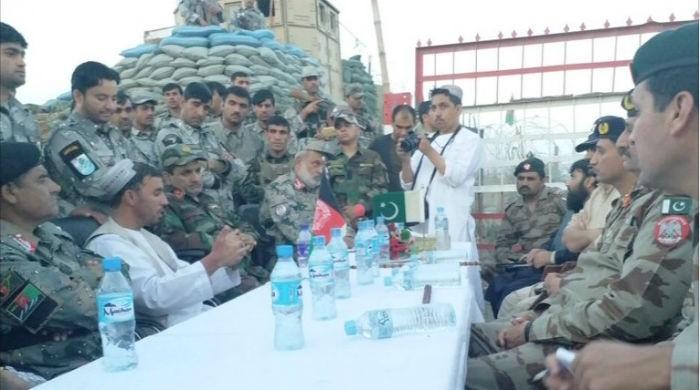 CHAMAN, 08 May: Pakistan and Afghanistan have agreed to conduct a geological survey to determine the border dispute at Chaman border. The geological survey will determine which border areas rightfully belong to which side of Pak-Afghan border.
To quell the mounting tension following clashes at Chaman border, the Pakistan and Afghanistan military officials held a flag meeting at Chaman border crossing. Frontier Corps North Sector Commander Brigadier Nadeem Sohail led the Pakistani military delegation while Afghan National Army Colonel Sharif headed the Afghan delegation.
The meeting discussed ways to resolve the ongoing border dispute between Pakistan and Afghanistan.
During the meeting, it was decided that the geological experts would conduct a survey of Kalay Luqman and Kalay Jahangir area along the border with the help of Google and geological maps. The geological survey will determine which border areas rightfully belong to Pakistan and which areas rightfully belong to Afghanistan at Pak-Afghan border.
Meanwhile, IG FC Balochistan Major General Nadeem Ahmad had claimed that Pakistani forces had killed 50 Afghan soldiers in retaliatory firing to Afghan forces at Pak-Afghan border. He said that securing Pakistan’s sovereignty is their first duty adding that they could go to any extent to secure the border. He said that Afghan forces harmed the population census process and warned of an even severe response if the same was repeated again.