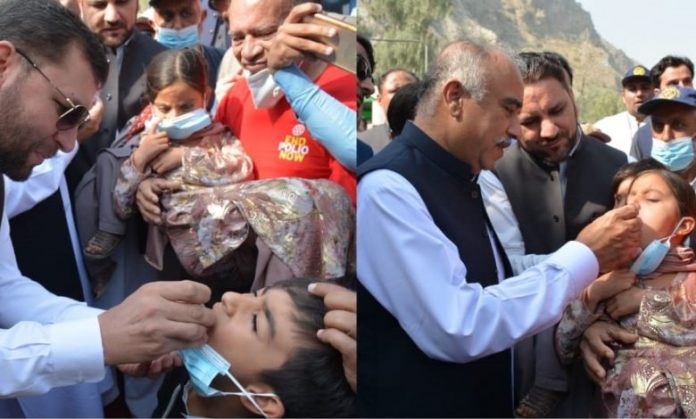 PESHAWAR: The World Polio Day was observed on Saturday in Pakistan and rest of the world.

A number of seminars, walks and other awareness sessions were organised in Pakistan to create awareness among the people about the crippling disease.

The main event in this regard was organised at the Zero Point of Pak-Afghan border in Torkham where Khyber Pakhtunkhwa Governor Shah Farman and Afghanistan’s Nangarhar province Governor Ziaul Haq Amarkhel inaugurated the vaccination campaign by administering polio drops to children below the age of five years.

On the occasion, Shah Farman and Ziaul Haq Amarkhel vowed that Pakistan and Afghanistan would wage a joint struggle to defeat polio.

Shah Farman said the people of both the countries share common religion, culture and traditions. He said Pakistan will benefit the most from the restoration of peace in Afghanistan. He said that a peaceful and prosperous Afghanistan is in the interest of Pakistan.

The governor said the huge gathering of Pakistani and Afghan officials and people for a common cause is a clear message to the world that both countries are committed to eradicate polio from the region. He said eradication of polio is must to ensure healthy future for our coming generations. He said that children cannot be left at the mercy of diseases, and the government will take every step to protect them.