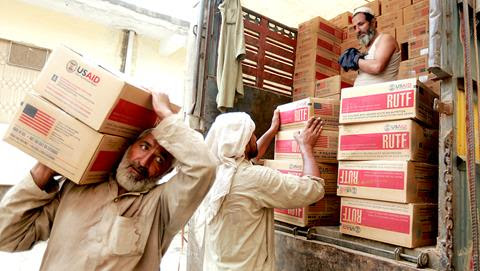 PESHAWAR: Together, the government of Pakistan and the United States Government, through the United States Agency for International Development (USAID), are delivering 340 metric tons of vitamin and mineral-enriched food for Pakistani children who are suffering from severe acute malnutrition, says a press release.

According to the National Nutrition Survey jointly published by the Government of Pakistan and the United Nations Children’s Fund (Unicef) in 2018, more than 40 percent of Pakistani children under the age of five suffer long-term health problems because of severe malnutrition.  Most of these malnourished children live in Pakistan’s rural areas.

“We commend the Government of Pakistan’s efforts to include improved nutrition at the core of its development agenda,” said USAID/Pakistan Mission Director Julie Koenen.

“We are proud to contribute to maintaining the availability of nutritious food to Pakistani children in need despite the operational challenges of the COVID-19 pandemic.  Good nutrition is key to the health and development of young Pakistanis, and a healthy population is critical to Pakistan’s overall economic growth.”

This collaboration also helps support Pakistan’s national nutrition policy framework and increases the capacity of the health system and civil society to ensure treatment of more than 24,500 children suffering from severe acute malnutrition.

The fortified food project is being implemented by Unicef in partnership with the Government of Pakistan’s nutrition and health departments and civil society organizations.

As part of its long-standing partnership with Pakistan, the United States Government is committed to improving food and nutrition security for Pakistanis.  Since 2009, USAID has contributed more than $800 million to Pakistan’s food and nutrition efforts.

Last month, as part of the on-going partnership with Pakistan’s National Disaster Management Authority (NDMA), the United States government, through the USAID, in cooperation with the Khyber Pakhtunkhwa Health Department, delivered 54 brand new ventilators to hospitals in Khyber Pakhtunkhwa to support Pakistan’s fight against the coronavirus pandemic.

Five of these ventilators were provided to the Lady Reading Hospital (LRH) in Peshawar. The equipments were part of the 200 ventilators contributed to Pakistan by the United States.  The ventilators were delivered in partnership with the NDMA and Chemonics.