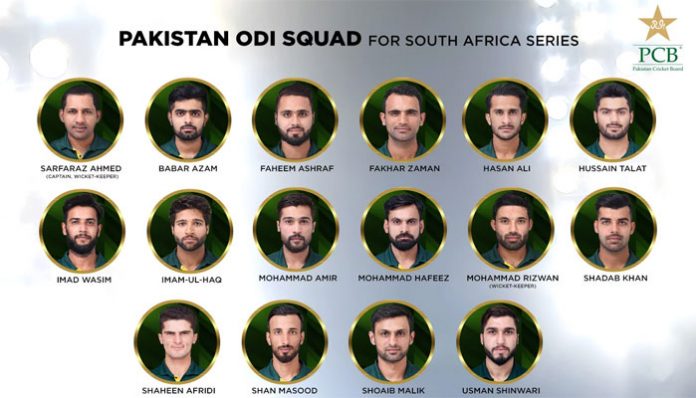 PESHAWAR: Pakistan on Wednesday announced a 16-men squad for the upcoming five-match one-day international series against South Africa with certain notable omissions and some surprise inclusions.

The ODI series will start on January 19 and ends on January 30. It will be followed by a T20 series, the squad for which is yet to be announced. Currently Pakistan are playing a three-match Test series in South Africa which they have already lost 2-0 and South Africa are looking favourites to sweep the series.

Junaid Khan was the major omission from the ODI squad who failed to find place in the team despite being in good form. Asif Ali was also dropped from the side due to his inconsistent form, while Haris Sohail was left out due to his injury. Notable players who made return to the side were Mohammad Amir, Mohammad Rizwan Hussain Talat and Shan Masood. The return of Amir was almost certain due to his good performance in the Tests, while Shan Masood has also been rewarded apparently for the same reason. Chief Selector Inzamam-ul-Haq said Amir’s good performance in the Test series made him an automatic selection and also helped us in the decision to rest Abbas.

Mohammad Hafeez, who retired from Tests before the ongoing series, has also been included in the ODI squad. The inclusion of Mohammad Rizwan in the Tests and now in the ODI squad is an indication that he may be included in playing eleven in case of unavailability of Sarfraz Ahmed. He has been added as second wicket-keeping option. This will also keep Sarfraz under pressure to perform with the bat and also behind the stumps.

Imam-ul-Haq, nephew of the chief selector, who has been included in the squad despite not-so-good recent performances, will be under pressure to justify his place. Inzamam insisted that Junaid Khan was left out because of “fitness issues”.

Faheem Ashraf, Hasan Ali, Shaheen Shah Afridi and Usman Khan Shinwari have been included in the pace attack keeping in view the pace-friendly pitches in South Africa. Shadab Khan and Imad Wasim have been included as spin options, giving Pakistan bowling attack an added bite. However, it will be Pakistan’s batting which will be under pressure to perform after failure in the Test series.