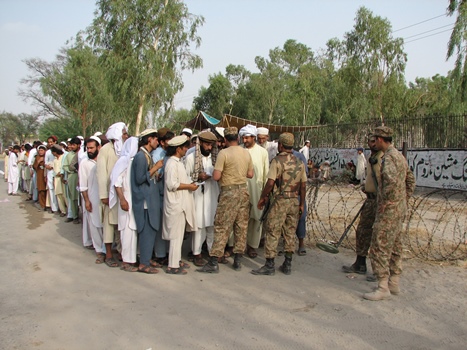 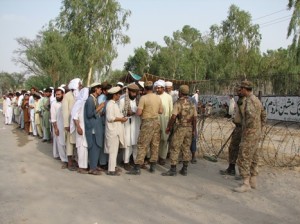 LAKKI MARWAT, June 28: The Pakistan Army has distributed food items among 500 families, who have been displaced from North Waziristan Agency and currently residing in Lakki Marwat district.

TNN correspondent says the army also established a medical and veterinary camp near the venue of food distribution.

One of the beneficiaries told TNN, “I am thankful to the Pakistan Army for giving me the relief goods. I also thank the people of Bannu, Karak and Naurang (Lakki Marwat) for their hospitality.”

Another displaced man, who received the relief items, said, “We were given ration at the Lakki degree college. The package includes pulses, rice and flour and tea. But we demand more ration because it is insufficient.”

The Khyber Pakhtunkhwa Health Department has decided to vaccinate children of the displaced families, less than 5 years old, against the polio and other diseases in DI Khan, Tank, Lakki Marwat, Karak and Kohat districts.