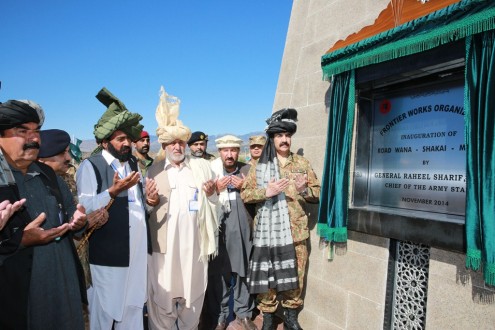 MIRANSHAH, November 10: The Pakistan Army has constructed a 76-kilometre road between Makin and Shakai in South Waziristan tribal region.

During a visit to the region, Chief of Army Staff General Raheel Sharif inaugurated the road, completed with the assistance of the United States Agency for International Development (USAID).

Addressing a tribal Jirga, the army chief said the road would greatly help in improvement of economic conditions in Khyber Pakhtunkhwa and FATA region.

He added that the development projects in FATA were aimed at improving the living standards of tribal people and finding a permanent solution to the law and order problems.