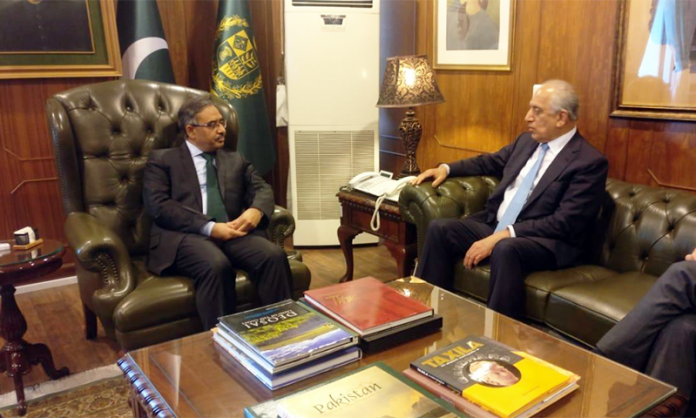 ISLAMABAD: Special representative for Afghanistan Reconciliation Ambassador Zalmay Khalilzad asks for Pakistan’s support to accelerate Afghan peace talks as well as a reduction in violence, as he believes concrete steps are necessary for a comprehensive settlement, says a statement issued by Public affair section of US embassy in Pakistan.

The statement added during Khalilzad meeting with Pakistani officials, he was extended completed support.

Ambassador Khalilzad met Foreign Secretary Shah Mahmood Qureshi and other officials from the Ministry of Foreign Affairs, as well as Chief of Army Staff Bajwa and senior military officials. Khalilzad expressed his appreciation for Prime Minister Khan’s recent remarks in support of the peace process and a broader vision for stability and prosperity in the region.

Ambassador Khalilzad reiterated that an end to the war will bring long overdue peace and stability for Afghans and an independent Afghanistan that precludes it from being used by terrorists to attack the United States or any other country.

He has visited Pakistan from for discussions with Pakistani leadership on developments in the Afghan peace process.  In addition, peace holds particular significance for the region by facilitating regional economic integration.  Ambassador Khalilzad said such integration contributes to advancing PM Khan’s vision for a development-centric transformation of Pakistan.

She began her visit with a joint meeting with US Special Representative for Afghanistan Reconciliation Ambassador Zalmay Khalilzad and an interagency delegation comprised of senior officials from the Ministry of Foreign Affairs and the Pakistani military.

Ambassador Wells and Ambassador Khalilzad also met with Chief of Army Staff General Bajwa. Ambassador Wells underscored the importance of all actors in the region takings steps to advance security, stability, and cooperation in South Asia. She also discussed opportunities to strengthen economic ties between the United States and Pakistan, and explored other areas for growth in our bilateral relationship.